Because the Washington Beer Blog is able to throw around terms like “craft beer” and “production” and “increase” with much less fear of recourse than the Brewers Association, we can tell you in simple terms: 2010 was a good year for craft beer.

We  can also very simply tell you that there are more breweries in the United States now than there were in 1900. About 140 of them are right here in Washington. There are now 1,759 breweries in America compared to 1,751 in 1900 (according to the Brewers Association). Apparently, back in the 1800s there were even more than that (according to historian Maureen Ogle.)

The Brewers Association just released data from the year 2010. It’s good news for the craft segment of the beer market. Last year craft beer production in the United States increased by 11 percent, while retail dollar sales increased by 12 percent.

While this is all good news, the data released today also notes that craft beer still only makes up 4.9 percent of beer sales by volume. There we go again: carelessly throwing around a dangerous word like “volume.”

As our friends at Beervana point out, the news is even better than in sounds, given the fact that the Brewers Association’s definition of “small and independent” breweries means that the numbers do not include beers brewed by the Craft Brewers Alliance (Redhook, Widmer, Goose Island, and Kona).

Here’s the official press release from the Brewers Association:

Total U.S. brewery count climbs to its highest level since 1900

The Association also reported a growth in the number of U.S. breweries, with eight percent more breweries than the previous year. In 2010, there were 1,759 operating breweries. Craft brewers produced 9,951,956 barrels, up from an adjusted 8,934,446 barrels in 2009. 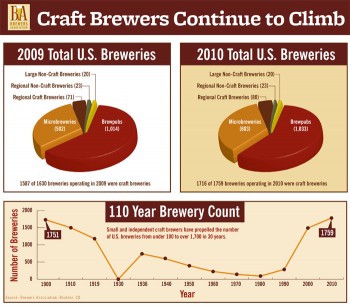 In 2010, craft brewers represented 4.9 percent of volume and 7.6 percent of retail dollars of the total U.S. beer category. The Brewers Association estimates the actual dollar sales figure from craft brewers in 2010 was $7.6 billion, up from $7 billion in 2009.

Overall, the U.S. beer industry represented an estimated retail dollar value of $101 billion. U.S. beer sales were down approximately one percent, or 2 million barrels, in 2010 compared to being down 2.2 percent in 2009. Total beer industry barrels dropped to 203.6 million, down from 205.7 million barrels in 2009. Imports were up five percent in 2010, compared to being down 9.8 percent in 2009. (Note: the Brewers Association does not count flavored malt beverages as beer.)

Gatza added, “We also found that three percent of craft brewer barrels, by volume, are distributed in cans, confirming a growing trend.”

A more extensive analysis will be released on March 24 during the Craft Brewers Conference in San Francisco. The Association’s full 2010 industry analysis, which shows regional trends and sales by individual brewery, will be published in the May/June 2011 issue of The New Brewer.

NOTE – If you have questions about how the Brewers Association defines “small and independent craft brewers” or how they calculated production adjustments, click here. The Washington Beer Blog elected not to include the footnotes in this post.