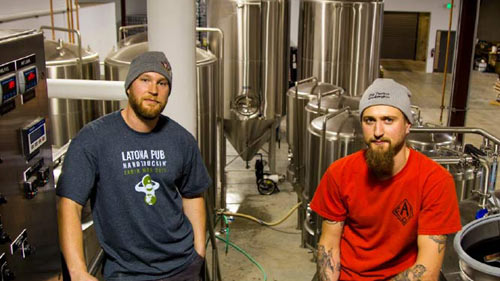 In 2009, Mike Runion and Travis Guterson (above) opened 7 Seas Brewing in Gig Harbor, their hometown. Among other things, theirs was the first Washington craft brewery to package its beer in aluminum cans, something that is very common now. The brewery was shoehorned into a building not far off of Highway 16, nowhere near the town’s lovely, historic waterfront.

After quickly outgrowing the first location, 7 Seas Brewing moved to its second location, built in an old grocery store closer to the waterfront in Gig Harbor, where it still operates today. A couple years ago, the company expanded to open a second location in downtown Tacoma—a brewery and taproom in the old Heidelberg Brewery building. Today we share news of another exciting development in the company’s evolution: they are moving the Gig Harbor brewery and taproom to a location on the town’s waterfront.

“The building’s design will be inspired by Gig Harbor’s rich fishing heritage and Net Shed-style architecture, fitting into the waterfronts established character. There will be substantial dock access for boats, kayaks, and SUPs to access the Tap Room via the water. Similar to their current operations in Gig Harbor, 7 Seas’ Tap Room won’t serve food, however customers are encouraged to bring in their own, or order from local restaurants to enjoy on-site.”

Located near the mouth of the harbor, the new 7 Seas’ Tap Room will feature a 21+ area and a family-friendly area, an event space, and a small pilot brewery (a research and development brewing operation).

According to Mike Runion, President at 7 Seas Brewing, “Growing up in Gig Harbor and having been a resident for over 27 years, my passion and excitement for this community is robust. Gig Harbor will always be home to 7 Seas Brewing and we couldn’t be more excited to create a new home, a true representation of 7 Seas brand, on the Gig Harbor waterfront.”

He adds, “With an explosion of growth and big box chains in Gig Harbor these past years, we are thrilled to be a home-grown business, started by Peninsula natives, investing back into our community and creating a unique destination, for many years and beers to come!”

Kit Kuhn, Gig Harbor’s Mayor, says, “The City of Gig Harbor is excited with the vision that 7 Seas is working towards. 7 Seas Brewing and their staff continue to be a great asset to our harbor, and we are sure this project will further their positive contributions to the fabric of our community.”

The new 7 Seas Brewing brewery and taproom is slated for completion in late 2020.