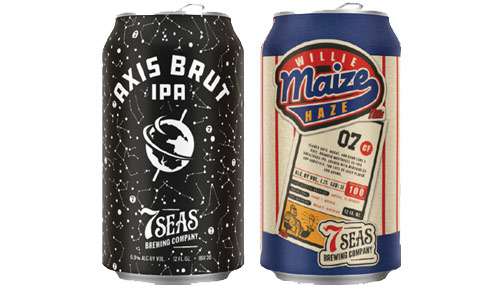 It’s worth noting that these two beers represent opposite ends of the IPA spectrum, but are both styles of IPA enjoying a lot of popularity these days. First up, a hazy IPA: murky, fruity, and juicy. Next, a bone-dry IPA with nary a hint of residual sugar, an utlra-light body, sparkling light appearance, and plenty of hop flavor.

Both beers available in 12-ounce cans at retailers across Washington. Here’s the official announcement from the brewery:

With the ever evolving, style blurring, and expanse realm of beer styles being crafted these days, 7 Seas is thrilled to introduce these two innovative IPA interpretations they are particularly enthusiastic about sharing. Both beers showcase an amazing aromatic bouquet of latest new hop varietals, but that’s where the commonality ends.

The two beers are as unique as their packaging; Willie Maize Haze has all the qualities of a New England Style Hazy IPA, brewed with flaked oats and maize for a soft, silky mouthfeel and loads of newfangled hops lead way to a strong, juicy punch of flavor and aroma. Axis Brut IPA, a relatively new style of IPA, is light in color and effervescent with an intense hop aroma and finishes with minimal bitterness. Axis Brut
IPA is truly an expression of how beautifully refined and delicate the IPA category can be.

7 Seas’ Director of Brewing Operations and Co-Founder, Travis Guterson shares, “I’m simply beyond enthusiastic about the release of these two new delicious and innovative IPA styles.” Guterson says, “the beers have been a total team effort, from the development of the recipes to designing the packaging, we are thrilled to expand the broad spectrum of tasty IPA’s we produce.”

Look for Axis Brut IPA and Willie Maize Haze IPA, along with other 7 Seas beers at fine retailers throughout Washington State. Cheers!