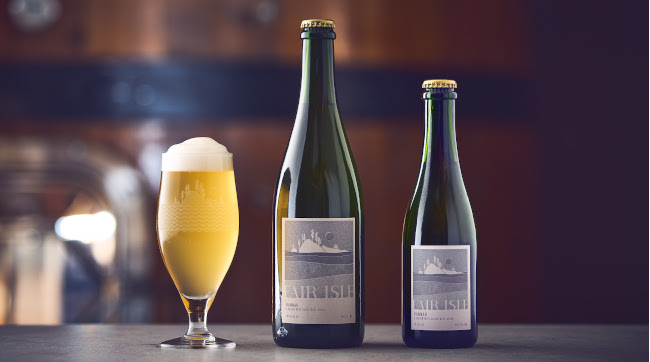 Hannah, a new beer from Seattle’s Fair Isle Brewing, is described as an approachable saison with notes of straw, tangelo, and grapefruit, but what really sets Hannah apart is the grain used to brew it. Along with barley, Fair Isle used Salish Blue, a new and innovative malted wheat from Skagit Valley Malting. This is the first beer brewed in Washington using Salish Blue.

“At first sip, Hannah may not strike you as a groundbreaking saison,” said an announcement from Fair Isle Brewing. “There is a creamy mouthfeel that you might associate with soft white wheat, and notes of citrus with a hint of tartness expected of our house yeast culture. However, it’s the local economic and lasting environmental impact of Salish Blue that we are proud to be a part of… We’re excited to be the first and only brewery in Washington State using Salish Blue.”

Salish Blue is a new kind of grain, bred by scientists at Washington State University, further developed at the WSU Bread Lab in the Skagit Valley, and then malted by Skagit Valley Malting in Burlington. What sets it apart, Salish Blue is perennial and not annual. (Read that again.) This is significant. Perennial wheat is not business as usual for farmers.

To produce barley, wheat, and most all the grains we love in our beers, bread, and hamburger buns, farmers plant the seed, apply herbicides and fertilizers, grow the grain, harvest the grain, till the fields, and repeat. Year after year after year. With Salish Blue, the grain is planted once. After harvest, it grows back next year.

The scientists at WSU bred Salish Blue for the Pacific Northwest environment. It is designed to resist disease and to retain more nutrients in the soil, which means less fertilizer and fewer herbicides are required to grow it effectively. That translates to environmental and economic benefits. Of course, eliminating the need to till the fields and spread the seed every year provides even more economic benefits.

“Eric Buist of Skagit Valley Malts reached out to us about this new variety of grain, similar to a wheat, that they were doing malting trials on with WSU,” said the announcement from Fair Isle Brewing. “They had a single run of just 700 pounds and were holding the rest back for seed for the following year. Always eager to explore, we jumped on it and purchased the whole lot.”

A SAISON WITH SALISH BLUE MALT