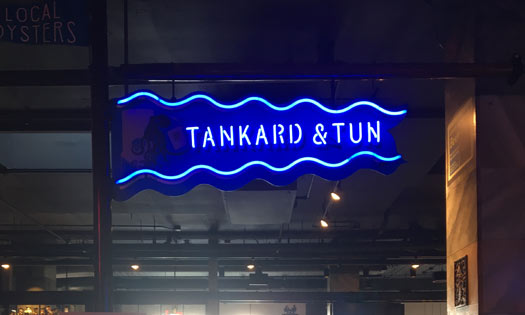 To stay relevant in the modern, dynamic beer world, a brewery must reinvent itself every now and again. Mix things up on occasion. Surprise people. That’s exactly what Pike Brewing Company has done with the opening of Tankard and Tun, the company’s new seafood-themed, but not seafood-exclusive, restaurant and bar. The new spot sits right above the company’s venerable pub, providing an elevated drinking and dining experience, in more ways than one.

This was just one part of a long-overdue expansion initiative, which saw Pike take over some other retail spaces at the Pike Place Market, move in some new tanks, and increase brewing capacity significantly. You can see the new tanks as you stroll around Tankard and Tun. More info on that here.

We recently visited Tankard and Tun for the first time since it opened to the public. We ate, we drank, we toured, we talked, we learned.

First of all, it’s a lovely space and is definitely fancier than the pub below, but Tankard and Tun is still casual. This is Seattle after all; we are never that fancy. Although it is kid-friendly, the menu and the atmosphere downstairs at the brewpub might make the kiddos happier.

The bar serves a selection of Pike Brewing’s beers. When we visited, they had a guest tap, too. They also serve cocktails made with local spirits, wine, and bubbly (by the glass, no less). The cocktail menu included a couple of beer cocktail, which is nice to see.

We will let the pictures do most of the talking. (Photos by Kim Sharpe Jones, by the way.)

Natural light showers in from large west-facing windows that look out across Post Alley to Elliott Bay. The restaurant and bar’s main room is just the right size: cozy, but also large enough to feel busy and happening.

Along with increasing the company’s brewing capacity and adding a new restaurant and bar, the expansion allowed Charles Finkel (founder, co-owner, craft beer founding father, etc.) to display more of his truly massive collection of breweriana. The vast assortment of antique mugs and tankards alone is mind blowing. Rest assured that the majority of Charles’ beer and brewing memorabilia collection is still in storage somewhere. Like what you see? Head downstairs to the Pub, and especially the Museum Room. Deciding what to display at Tankard and Tun must have been a challenge and a joy.

In addition to the main dining area and bar, there are two smaller spaces. Each room is available for busy nights when a little extra capacity is needed. Also, each room can accommodate up to 30 people for private events, depending on how the party is configured (seated or buffet). Particularly cool, the mezzanine overlooks the new tanks and also provides a great view downward toward the mash tun and the rest of the brewery. Pike Brewing makes use of a traditional gravity flow system that was built vertically on three levels of the building. Visit while they are brewing and you may see someone chugging up and down the spiral staircase and across the catwalk that runs right next to the mezzanine (high-fiving the brewer as he or she runs across the catwalk is encouraged). 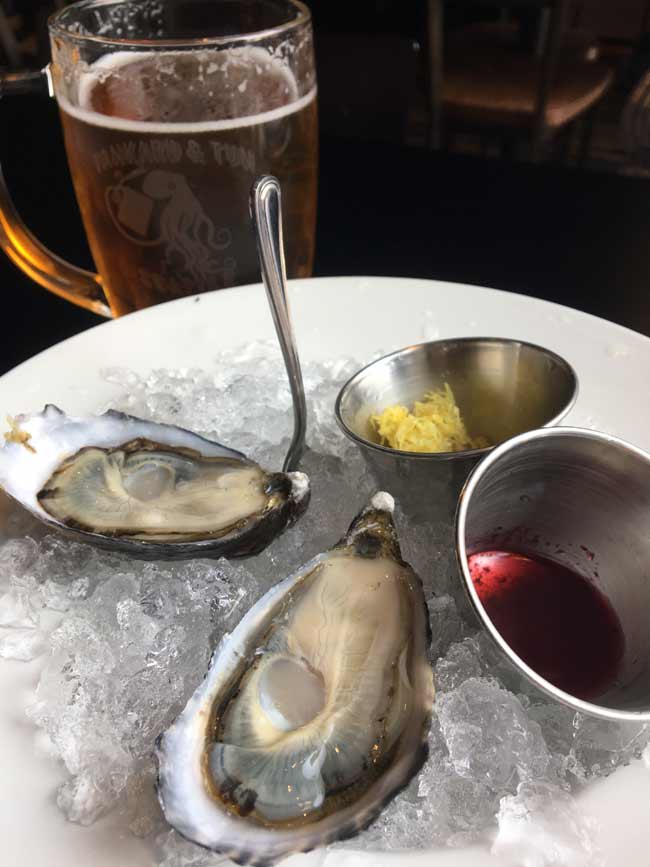 Oysters are one of the specialties at Tankard and Tun. Like these two Shigoku oysters served with lemon zest and a lovely Huckleberry Mignonette made with Pike Brewing’s Monk’s Uncle Tripel. Pro tip: during happy hour (4:00-6:00) oysters are just $2.

It’s about time that people start treating beer with some respect. Pairing beer with pizza and hamburgers is all well and good, but why not elevate the meal? What’s wrong with sitting a great beer next to a real culinary masterpiece? For instance, a lovely Space Needle IPA alongside a starter plate of braised octopus and pork belly, which is served with fried burdock, edamame hummus and fresh wasabi. Remarkable. My favorite dish of the night.

Other menu items include upscale versions of pub classics, like a huge, decadent burger with”fancy cheese,” seared pork belly, fried soft egg and pickles served on a toasted brioche bun. Also, an amazing plate of fish and chips (pictured below). Along with that, the menu features a lot of fancier stuff: a half Dungeness crab; a grilled pork cheek sandwich (pictured below); a bouillabaisse with rockfish, prawns, salmon, and mussels; a whole-fried Alaskan snapper; and a lot more.

Another really cool thing about the menu, it offers you suggested beer pairings. Instead of just making one suggestion for each dish, they make two: one to complement the dish, the other to provide contrast.

And for dessert, a dutch baby with Meyer lemon curd and berry preserves. Along with that, chocolate pudding with a caramel sauce made with Pike’s XXXXX Stout. I recommend ordering the aforementioned stout to accompany either dessert, or just order both desserts. Don’t you judge me!

Readers of Seattle magazine recently voted Pike Brewing the best brewpub in Seattle. And that was before Tankard and Tun was even open! No doubt, the friendly old pub downstairs is as familiar and comfortable as your favorite pair of blue jeans, but it won’t take long for you to warm up to Tankard and Tun.