Think of this story as escapism, not a suggestion to go gallivanting across the country. Think of it as a reminder that eventually things will return to “normal.” Envision better days ahead. This story was written months ago, chronicling a trip we took to Portland before “COVID” was part of our regular vocabulary.

The beer scene in Portland, Oregon is intimidating for first-timers. Even frequent visitors can feel overwhelmed. There is just so much to do and there are just so many breweries and taprooms to visit. When traveling to Portland for a weekend of beer touring, you must avoid FOMO (fear of missing out) because there is no way you can do it all, so don’t try. Get some advice, like we offer here, make a plan, and then relax and enjoy it. Savor the breweries you visit and don’t lament the breweries you miss.

Below we share some recommendations for beer lovers hitting Portland for a weekend of beer hunting. Our suggestions include a great lodging option. This is not a comprehensive list of PDX beer destinations by any stretch of the imagination. By now, many well-schooled beer aficionados are familiar with places like Hair of the Dog Brewing, Cascade Barrelhouse, Upright Brewing, and some others so we decided to focus on some of the newer and less-renowned breweries the deserve your attention.

First up, let’s talk about your home base. After a lot of research, a lot of price-checking, and a lot of advice, we opted to stay at the Inn at Northrup Station in Portland’s Slabtown neighborhood, a retro-remod hotel. This completely revamped motor lodge was originally built in 1979 but is now refurbished and reimagined for the 21st century. It stylishly embraces the past but sits firmly in the present with all of today’s conveniences.

Valuable features included: affordable room rates for an in-city hotel; kickass, fresh, free coffee available in the lobby 24 hours a day; each room is a suite with a full kitchenette; FREE PARKING; the neighborhood is quiet and “safe,” even walkable after dark; you’re within stumbling distance of restaurants, bars, and a brewery; and the hotel is located on Portland’s streetcar line, as well as a bus line. Inn at Northrup Station; 2025 NW Northrup St, Portland, OR 97209; ww.northrupstation.com; (800) 224-1180. 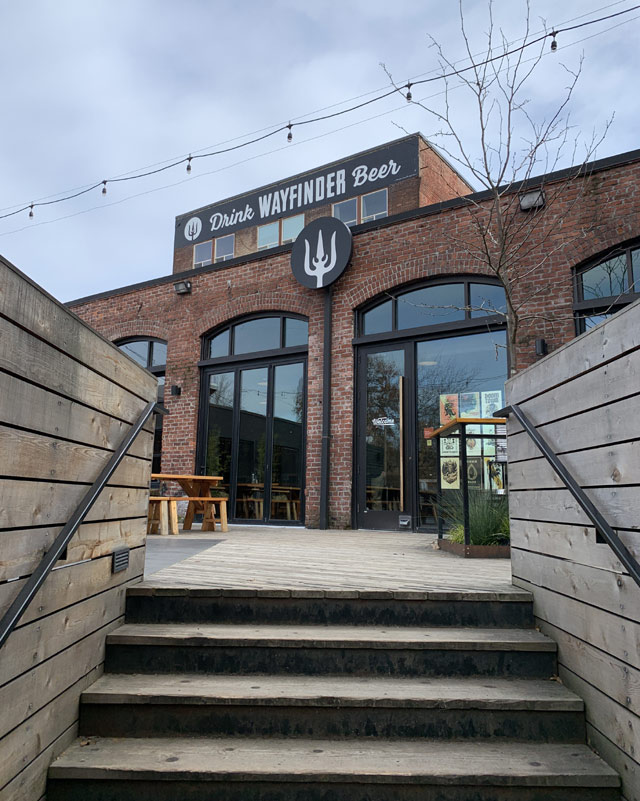 Where there’s a will there’s a Wayfinder. Not just a brewery, but a collaborative project conceived by a group of veterans from the brewing and restaurant industry, Wayfinder Beer opened its expansive brewery and taproom just over three years ago and has earned plenty of accolades.

The food is great and the beers are outstanding, especially if you are interested in lagers, which Wayfinder does exceedingly well. It’s an old, brick warehouse building with an expansive 2,000 square foot deck out front. The kind of place you do not want to leave, especially on a sunny afternoon. 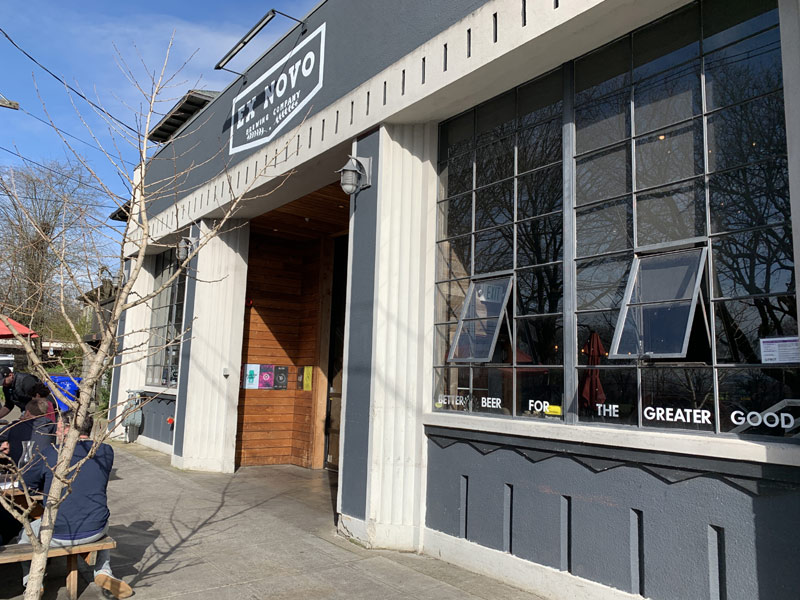 The company’s original location in Portland opened in 2014 (they have other locations in nearby Beaverton and not-so-nearby Corrales, New Mexico). The taproom is compact and most-often busy, with picnic tables out front on the sidewalk. If you want a table inside, check-in with the host, otherwise step up to the bar, get a beer and find your own space. Ex Novo Brewing is just a few blocks north of the Moda Center, so if you’re headed to a basketball game or a concert, it is a great place to pre-function or post-function. The food menu is small but includes a burger of some repute. 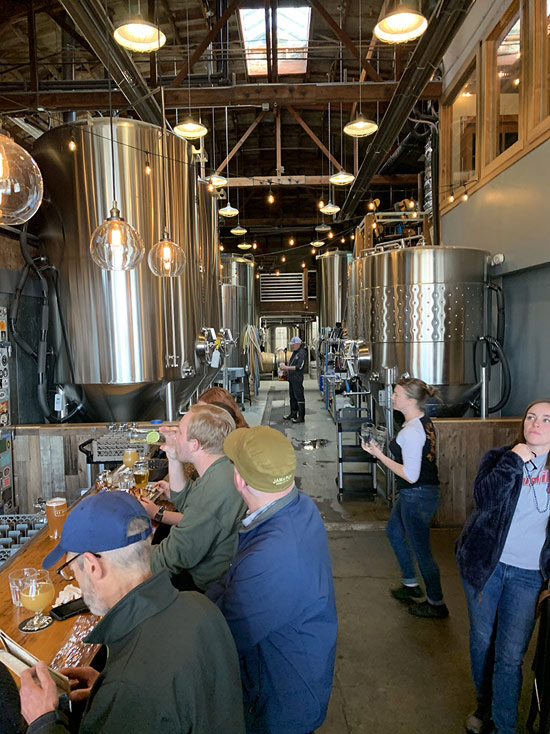 Beer suggestions: Perle Haggard – A German-style lager named after the hops they use to make the beer and a legendary country music star; Aperture Hazy Pale – A tasty pale ale brewed with gobs of Mosaic and Simcoe hops. Essentials: www.exnovobrew.com; (503) 894-8251; 2326 North Flint Ave, Portland, OR 97227; 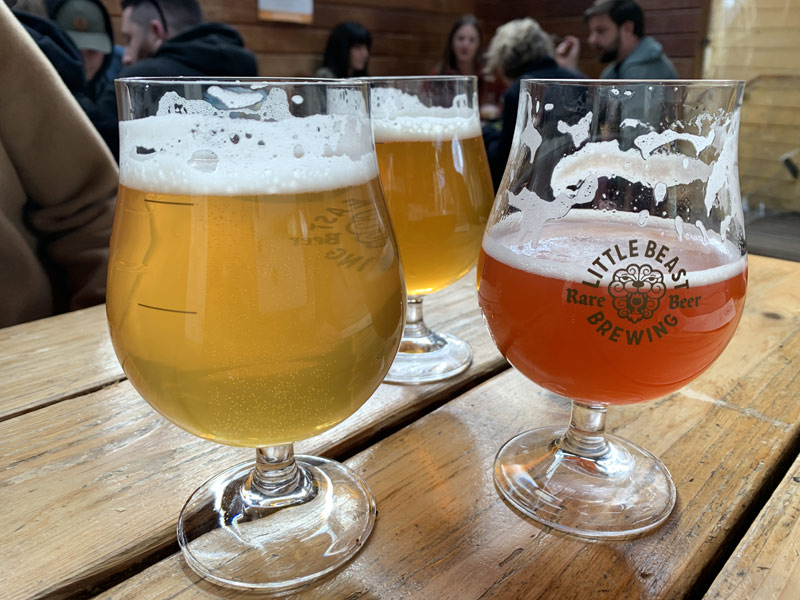 The brewery that feeds this taproom and beer garden specializes in wild-fermented, wood-aged, mixed-culture, and blended farmhouse-style beers. Founder and brewer extraordinaire, Charles Porter, earned his street credit producing breathtaking beers for Logsdon Farmhouse Ales. Since opening Little Beast Brewing his reputation has continued to grow. The brewery’s name is a nod to the microflora—the bacteria and other microscopic little critters—that help ferment the beers.

While the brewery (no taproom) is located southeast of Portland in Clackamas, the Beer Garden in Portland offers a respite along a busy street in the city’s Southeast Neighborhood. Keep your eyes peeled because it’s located in an old house and this unassuming beer destination is easy to miss. The front yard patio and the all-weather covered deck provide the beer garden atmosphere, while the cozy interior invites crowded conversations. The small but thoughtful food menu includes small plates, sandwiches, and a couple of entrees. Located in an industrial corner of Southeast Portland, Ruse Brewing takes a novel approach to beer, focusing largely on farmhouse-style beers and IPAs, two styles that are often mutually exclusive—many breweries excel at one or the other, but rarely earn accolades for both. No smoke and mirrors, no illusions, this is not a ruse, it is a great brewery. 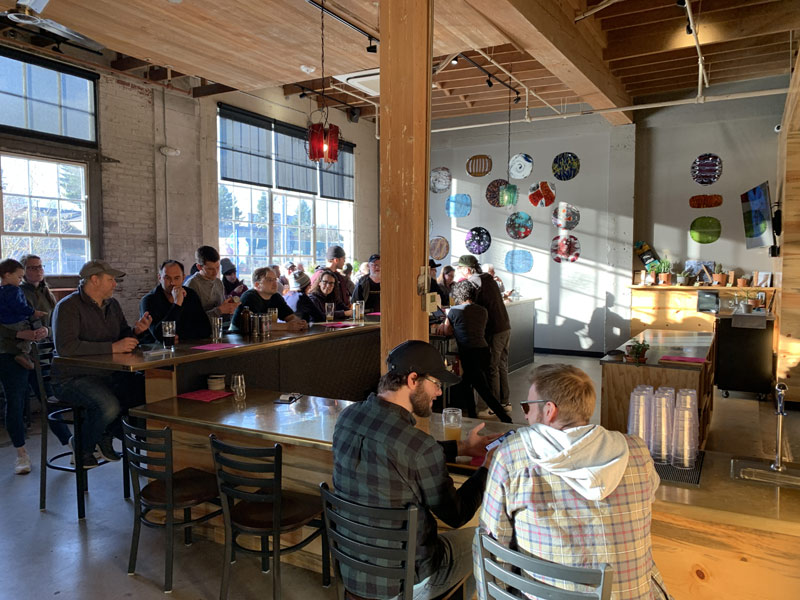 Since opening in the summer of 2018, Ruse Brewing has earned a reputation for its beer, earning its share of awards and applause, but has also garnered a place in the hearts of the local arts community. They’ve worked with local artists to conceptualize beers, creating events that showcase both the beer and the art. The brewery and taproom, washed in daylight from large west-facing windows, often hosts live music. We enjoyed a performance on a Sunday afternoon. Bring your own food. Unlike most Portland taprooms, this one does not have a kitchen. Beer suggestions: A dynamic and consistently creative beer menu makes it hard to provide particular suggestions. Try at least one of their unapologetically hop-forward beers and don’t ignore the sour, funky stuff either. Essentials: www.rusebrewing.com; (503) 662-8325; 4784 SE 17th Ave, Portland, OR 97202;

Our goal was to focus on newish breweries and less-known breweries, but this was too much to resist, and so near our hotel. The most recent addition to the Breakside Brewing family, the Slabtown brewery and pub in Northwest Portland, opened in 2017. This neighborhood brewpub serves a nice mix of familiar Breakside favorites alongside in-house beers brewed on location and available nowhere else. 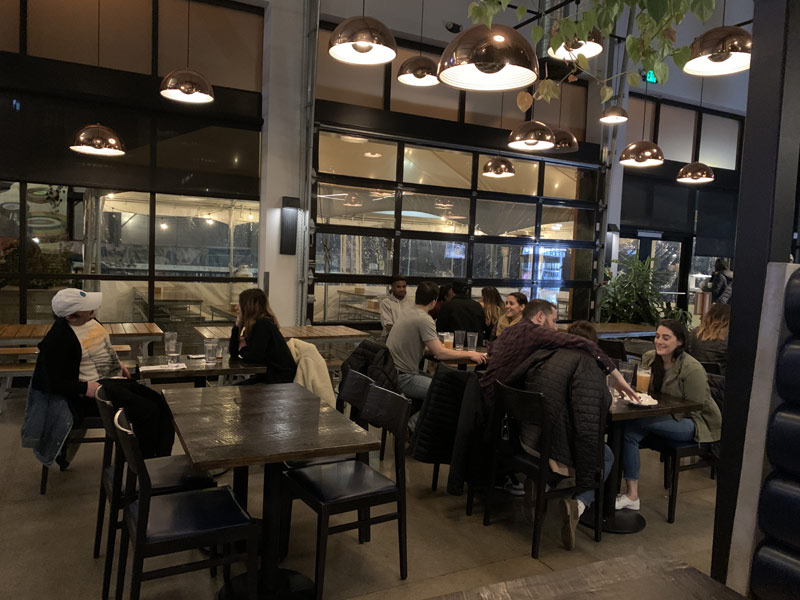 The large, two-story space is modern and sleek but still feels comfortable and friendly. A large tent out front provides even more space. It can be a busy place at the dinner hour, but the upstairs area is a bit less hectic and has its own bar and bathrooms. The food menu includes a nice variety of salads, sandwiches and a few other entrees. 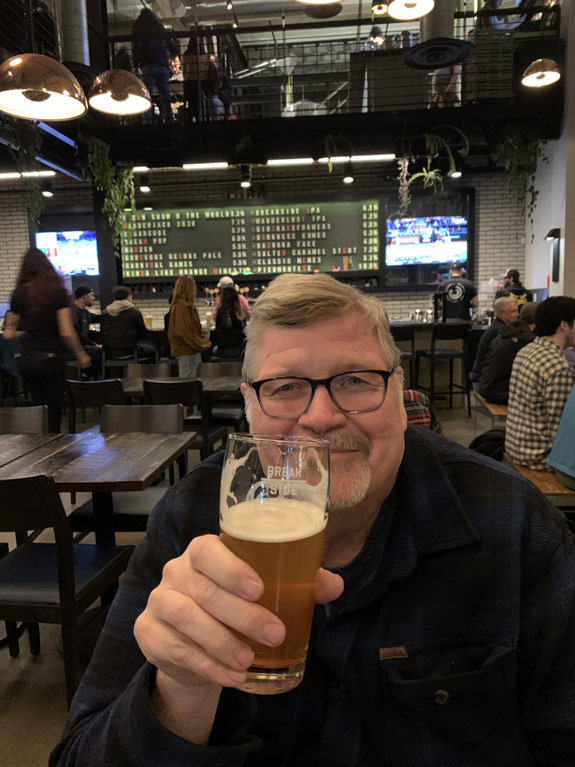 Beer suggestions: What Rough Beast Hazy IPA – I do not often recommend, or prefer, this style of beer, but this one one is an exception. Beyond that, ask about the house-brewed beers and you may discover something amazing like a salted caramel stout (yum!). Essentials: www.breakside.com; (503) 444-7597; 1570 NW 22nd Ave, Portland, OR 97210.

Portland is a great beer destination and you shouldn’t worry about all the places you don’t have time to visit. Just enjoy the places that you do visit.