Beer and football go together like chips and salsa. A tailgate party isn’t a tailgate party without a cooler full of beer. Empty beer cans are perfect for throwing at the TV when your running back fumbles the ball on his way into the endzone. Empty? Internationally, Super Bowl Sunday is probably the most profound of all the “beer holidays.”

The National Football League has traditionally partnered with nothing but the biggest breweries in the world (MillerCoors and Anheuser-Busch InBev) for the sake of generating huge amounts of advertising revenues. It’s a great partnership, the manifestation of shared interests. Both the NFL and AB-InBev only care about making money. The NFL doesn’t really care about its players beyond the revenues they generate. AB-InBev doesn’t really care about beer drinkers at all. We are all just stooges in their neverending game of three-card monte.

Anyway, since more and more NFL fans are getting turned onto craft beer, the following news should not come as a surprise. Anheuser-Busch InBev has partnered with NFL teams to create “specialized brews” to appeal to people who like local craft beer and the local NFL team. So, Golden Road Brewery produced a special beer targeting Rams fans, Four Peaks Brewery created a beer targeting Cardinals fans, and on.

What could possibly go wrong?

Of course, they don’t realize that for local craft beer fans in places like Seattle, LA, Phoenix, Denver and Washington D.C. the wound is still a scab and this just picks at it.

So without further ado, here are the beers that Anheuser-Busch InBev’s squadron of once-craft breweries are rolling out for the 2019-2020 NFL season.

Golden Road Brewing and the Los Angeles Rams
Whose House?! Blonde Ale
I would have called it “Who Cares?! Blonde Ale” because nobody in LA cares about the Rams. Described as “a light and bright Blonde Ale that boasts a smooth finish which fans can enjoy while watching any football game this season,” this sounds like a positively uninteresting and uninspired beer well-suited for the voiceless, passionless fans of a team that should probably still be in St. Louis, which is where they will probably end up again when LA’s fickle fans get distracted and go chasing after the next shiny thing.

Elysian Brewing and the Seattle Seahawks
The Noise Pale Ale
To their credit, and they deserve that, Elysian Brewing wanted to give back to the community with this beer. A portion of the proceeds from The Noise Pale Ale is donated to the Plymouth Housing Group (PHG), a nonprofit dedicated to providing permanent housing and support services to the region’s homeless population. Regardless of their attachment to the mothership, good people still work at Elysian. Go Hawks! 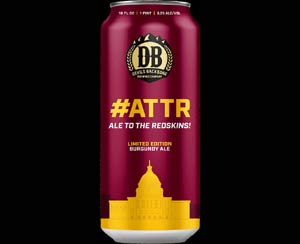 Devils Backbone and the Washington Redskins
#ATTR (Ale to the Redskins) Gold Ale and #ATTR Burgundy Ale
Devils Backbone created some Redskins-themed beers last year, yada yada yada, asking fans to vote for their favorite, yada yada yada, and this year they’re going to brew…. blah blah blah. Instead of calling this one Burgundy Ale, I would have called it Theisman’s Red Leg Ale and put a picture of Lawrence Taylor on the label. Tag line: “Snap! Like a twig.” 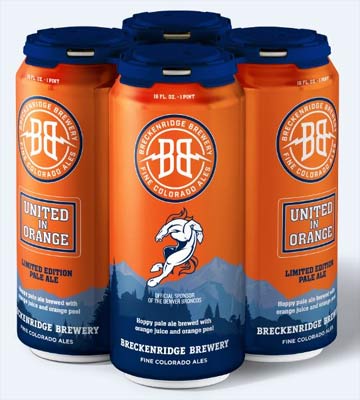 Breckenridge Brewery and the Denver Broncos
United in Orange Pale Ale
Oh hurray! This one is brewed with orange juice and orange peel. It was originally introduced in 2016, just a couple years after the Seahawks dismantled the Broncos in Super Bowl XLVIII. As a lifelong fan of the Seahawks, I hate the Broncos almost as much as I hate Bud Light Lime-A-Rita. I would have named this beer 43-8 Crushed and Humiliated Orange Pale Ale. 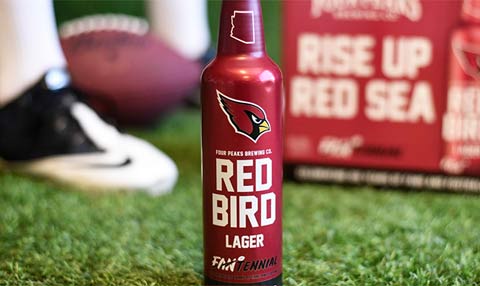 Four Peaks Brewery and the Arizona Cardinals
Red Bird Lager
Its an amber lager designed to quench the thirst of the most ardent Cardinals fans. Hmm. I didn’t know they had ardent fans. Apparently the most die-hard Cardinals fans are called “the Red Sea?” When you can hear them at all, they sound more like the Dead Sea. Unless the Los Angeles Rams get there first, the Cardinals will probably return to St. Louis someday. “Hey Beerman, I’ll take a Red Turd Lager, please.”

Yeah, too easy. That one was just hanging out there, waiting for my inner 12-year-old boy to grab. Kind of like this entire silly story.