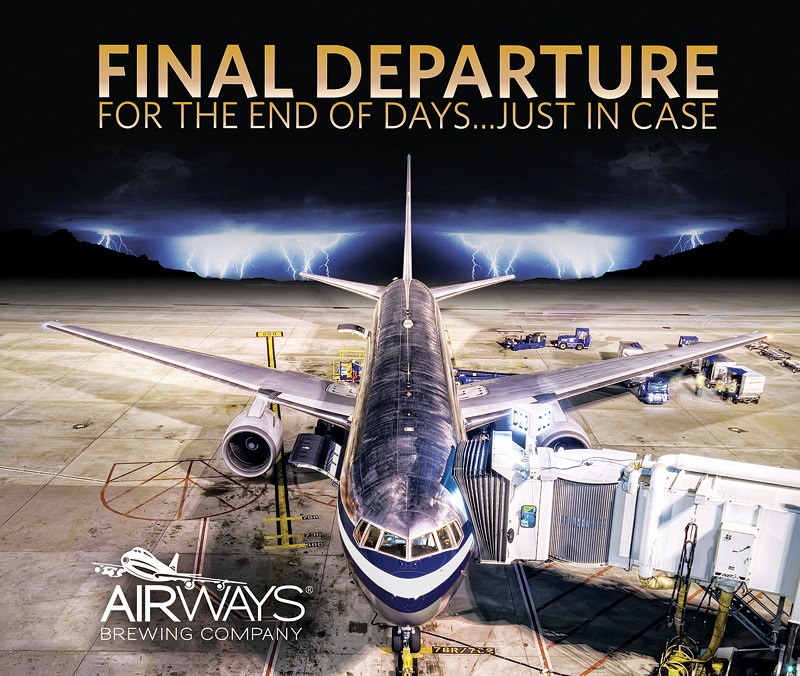 By now everybody knows that the Mayan calendar predicts that the end is near. Very near, in fact. Last week I told you about Elysian Brewing‘s plans to celebrate the end of the world (read that post here). Today I want to tell you about Airways Brewing’s plans to prepare for the final departure with an End of Days Party at the company’s Tap Room in Kent on Thursday, December 20.

To commemorate the profundity of the occasion, Airways Brewing concocted a special beer: Final Departure Imperial Stout. Read our previous story about the beer here. At the End of Days Party you will be able to enjoy three different versions of the beer. Along with the original version, Airways Brewing will pour two barrel-aged versions (rum and whiskey). A limited supply of 22 oz bottles are currently available while supplies last. The bottles are available at either Airways Brewing location (the Airways Tap Room and the Beer & Bistro), but the party takes place at the Tap Room.

Here is more information from Airways:

Await the Apocalypse at Airways Brewing’s “End of Days” Party

Craft beer lovers and prophecy enthusiasts are invited to await the Mayan’s predicted “end of days” on Thursday, December 20 at Airways Brewing Company’s Brewery & Tap Room in Kent. Open from 3 pm to midnight, those anxiously waiting for the clock to strike midnight to see if the Mayan calendar rings true will enjoy three special versions of Airways’ limited edition Final Departure Imperial Stout, including the original (its first time being available on draught), plus two special versions aged in rum and whiskey barrels. Intended to be enjoyed on December 20, the day before the predicted end of the world, Final Departure Imperial Stout boasts a 9.9 percent ABV and 75 IBUs. As Airways Brewing’s darkest beer yet, notes of coffee and chocolate give way to a toasty finish accompanied by a firm hop bitterness. No matter what December 21 holds, this big, bold stout is sure to make you forget what potentially lies ahead.

For those who prefer to enjoy their last moments on earth at home, the final 15 cases of Airways’ Final Departure Imperial Stout – available in 22-ounce bottles – will be available for purchase at either of Airways’ Kent locations beginning Wednesday, December 12. Enjoy it with friends on December 20, or take a chance and save it, as this limited edition stout was designed get better with age.

This event is open to the public; Airways Brewing Tap Room is a 21+ establishment.