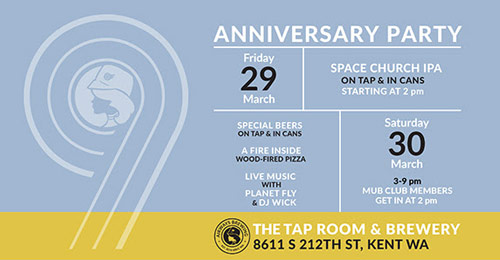 This Friday and Saturday (March 29 and 30) Airways Brewing celebrates its 9th anniversary at the brewery and taproom in Kent. Keep an eye on the company’s social media channels this week as they make announcements about special beer releases ahead of this weekend’s celebration.

“In the last nine years, we’ve seen certain styles popularity come and go, but what hasn’t changed is people’s affinity for hoppy beers,” says Alex Dittmar, the owner/brewmaster at Airways. “This year, of course, we’re offering a couple of hoppy anniversary beers, as well as a twist on our favorite lager style: pilsner.”

Airways Brewing began as a small brewery operating out of a business park on West Valley Highway in Kent. In the beginning, they actually brewed most of the beer at Two Beers Brewing. It wasn’t contract brewing in the traditional sense: Alex Dittmar actually did all the work himself during the hours that Two Beers wasn’t brewing any of its own beers. The brewery, which has grown a lot since those early days, has since moved to its current location just off of Highway 167 on South 212th Street. The company also operates the Airways Bistro and Beer Garden in downtown Kent.

While the special-release beers remain a secret, we do know that they’ll tap into the coveted Space Church IPA, a beer formulated and brewed to honor their nearby neighbors (and regular customers) at Blue Origin, the spaceship people. The beer will be available on draft and in cans. 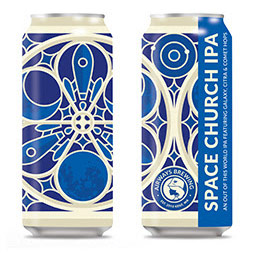 When they open on Friday they’ll re-release Space Church IPA to get the weekend started, but the hootenanny really gets rolling on Saturday. More beer releases, live music, and food from A Fire Inside wood-fired pizza truck. Enjoy the musical stylings of Planet Fly and DJ Wick. Keep an eye on the Facebook event page for more details. Note that this is a 21+ event.