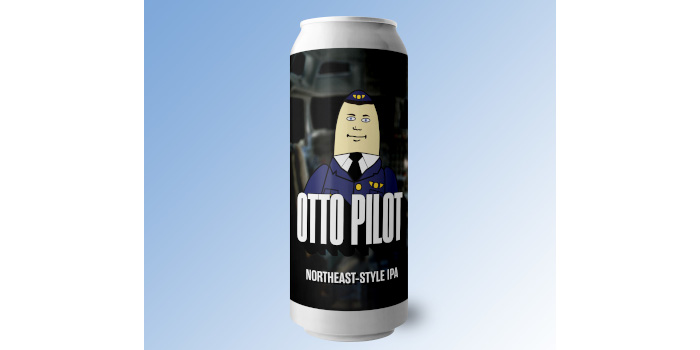 Finally! A beer that answers the question, “What’s our vector, Victor?”

Airways Brewing did not plan to create Otto Pilot Northeast-style IPA to memorialize Morgan Herzog, the founder of The Beer Junction, but that’s the way 2020 goes. The brewery released this new beer on Thursday, July 30th (more info below). In case you don’t recognize the name, it is an obvious reference to the movie Airplane!

I am not going to mince words here, but just as the entire world was about to go completely to hell in a bucket, Morgan Herzog passed away in January, a victim of Multiple Myeloma, a form of blood cancer. Like his many other friends, I had no idea what the rest of 2020 had in store for us. Morgan’s passing sucked more than enough as an isolated event.

I am thinking of this beer as Morgan Herzog’s big, middle finger flipped in the general direction of 2020, telling the entire year to f*** the hell off! There is no better way to do that than laughing in 2020’s big, fat, stupid face! Hopefully, this beer conjures happy memories and makes you smile at least. If the thought of the movie Airplane! doesn’t make you chuckle, then you’ve never seen it or you’re a joyless weirdo.

Two seriously afflicted beer lovers, Alex Dittmar and Morgan Herzog had more than beer in common. They just didn’t know it. The founder of Airways Brewing and the founder of The Beer Junction knew each other for eight years before discovering that they shared an uncommon, nearly unhealthy appreciation for Seinfeld, the beloved 1990s television show about nothing at all, so described because the characters never seemed to learn anything at all.

Well, in real life Alex and Morgan did eventually learn something. “Sometimes you know someone for a long time, but don’t realize how much you have in common until much later in your friendship,” says Alex. “Such was the case with Morgan Herzog. I’d known him since 2010, but it wasn’t until late 2018, that I discovered Morgan was, like me, a huge Seinfeld fan. And, I mean the type where I could text him a setup, and he’d respond with the punch line.”

“We’d collaborated on a Seinfeld-themed beer and were planning another one when, on a whim, I emailed Morgan and asked if he would also be interested in collaborating on a beer around the movie Airplane!, since 2020 would be the film’s 40th Anniversary. Turns out, it was his “favorite comedy ever!” This is how Otto Pilot IPA was born.”

“I was deeply saddened as the craft beer community lost a great advocate and I lost a friend that I wished I’d gotten to know better,” says Alex. “With the blessing of Morgan’s wife, Allison, we brewed this beer and dedicate it as a remembrance to Morgan, who left us way too soon.”

Get the beer and hoist one in memory of Morgan Herzog. He was a great guy. His business and my business grew side by side, on just about the same schedule and trajectory. The Beer Junction was the first business to step up and sponsor the Washington Beer Blog. Morgan helped me figure out how I could continue to do what I’ve now been doing for over a decade.

Along with his wife Allison, he built The Beer Junction with passion, energy, vision and creativity. Though the pandemic is currently creating some obstacles, The Beer Junction forges ahead under Allison’s guidance.

Available on tap and in cans at both Airways Brewing locations. Some limited distribution, with the bulk of it going to The Beer Junction in West Seattle.

Local voices talk about diversity, equity, and inclusion in the beer industry
How a beer goes from a whim to a winner at Reuben's Brews
A fresh hop beer brewed to support Yakima schools