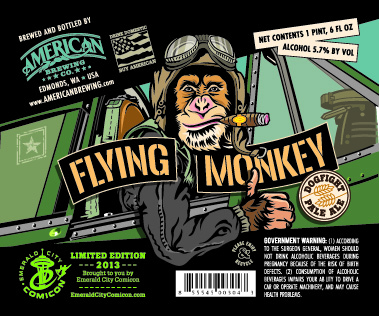 They’re coming. Rest assured, they are coming. For the first three days in March, more than 65,000 geeks, gamers, trekkies, and pop culture enthusiasts of every kind will descend upon Seattle for Emerald City Comicon 2013. And they’ll be drinking beer.

Yes, even people who dress up like Princess Leia and Mr. Spock like to drink beer. Knowing this, the organizers of Emerald City Comicon teamed up with American Brewing Company to create an official beer for this year’s convention. Flying Monkey Pale Ale is a syntheholic beverage available from replicators throughout the ship. (That was a trekkie joke; Flying Monkey is real beer.)

Expect Flying Monkey Pale Ale to be released during the days leading up to Emerald City Comicon – probably the last week of February.

“We wanted to create a beer that was full-bodied and delicious but not overpowering,” says Neil Fallon, owner of American Brewing Company. “We already made a Pale Ale—Impaler NW Pale Ale, which is 5.7 percent ABV and has a lot of the hoppy punch that people recognize in many of Skip’s beers,” Fallon said, referring to Skip Madsen, American Brewing’s zymurgically gifted Brewmaster. “For this beer, we wanted to mellow it out a bit. Flying Monkey Pale Ale doesn’t have quite the same hop bite—it still has a great hop aroma and flavor, and it finishes really clean.”

Without divulging too many secrets, Fallon suggested that they used Citra and Columbus hops for the Flying Monkey. The beer clocks in at about 5.7 percent ABV.

Several bars near the Washington State Convention Center have already already put in orders for the beer. Flying Monkey Pale Ale will be available on tap and in 22-ounce bottles at bottleshops and better beer retailers around the area.

Emerald City Comicon provided the label artwork. Actually, the artist was James Klauser, the Creative Guru from Bullseye Creative. Why Flying Monkey? Think of the Emerald City. Think of the Wizard of Oz and the Wicked Witch’s flying monkeys. Now imagine a different kind of Flying Monkey. Obviously there is no shortage of creativity when you get involved with Comicon.

Other beer companies have teamed up with comic artists, or other artists of elevated stature, in the past and produced notable label artwork. Many people are familiar with Ralph Steadman’s work with Flying Dog Brewing. Last year Elysian Brewing teamed up with the legendary Charles Burns for it Apocalypse Series. Still, this level of illustrated artwork is not typically seen on beer labels. I suppose typical beer labels don’t need to be so cool.

Emerald City Comicon is the largest comic book and pop culture convention in the Pacific Northwest.  The convention itself takes place on March 1st through 3rd at the Washington State Convention Center in downtown Seattle. The event will see tens of thousands of comic book, cartoon, sci-fi, gaming and pop culture enthusiasts descent upon Seattle. There will be hundreds of exhibitors at this year’s event.

This year’s celebrity guest list includes Patrick Stewart, Christopher Lloyd, Carrie Fischer, Adam West and Burt Ward. If you don’t know who those people are, then Emerald City Comicon probably isn’t your cup of tea. In fact, if you don’t already know about Comicon, you probably don’t care. Still, you cannot stick your head in the sand and ignore it. This is a big deal.

Come on, just admit it. You have an original, still-in-the-box Darth Vader action figure hiding in a closet somewhere.

When the organizers of Emerald City Comicon contacted Neil Fallon about making a beer, they got the right man for the job. One of Fallon’s treasured possessions is a collection of vintage comic books. “I keep them because they remind me of times gone by. They remind me of good times with my Dad,” Fallon says. “My Dad once told me that he had, but threw out, a copy of Action Comics No. 1.”

I suppose that explains why he holds on to his comic book collection: to atone for his father’s unforeseeable folly. Released in 1938, Action Comics No. 1 is the only comic book to auction for more than $2 million.