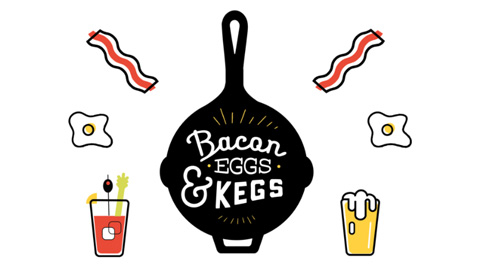 Brunch is like the new version of church. I heard someone say that on NPR as part of a commentary on the increasing popularity of brunching. It’s what millennials and many other young Americans do these days in lieu of congregating in churches on Sunday mornings. Not sure I’m buying into that correlation, but I get the point; brunch is increasingly popular these days. And that’s the whole idea behind Bacon, Eggs, and Kegs, it’s like the Super Bowl of brunch.

For the eighth year, Bacon, Eggs, and Kegs returns to Seattle next weekend (June 22, 23). Along with all the food, the event includes beer from a number of local breweries. The list is below. Also, many other boozy delights, live music, zany games, and more. Once again, the event takes over the Century Link Field North Plaza.

Here’s some more info from the event organizers:

Bacon Eggs & Kegs will offer all things brunch for one weekend only in 2019. The event will feature delicious bacon and egg brunch dishes for purchase from local restaurants, craft beer and cider tastings, games like bacon bingo and egg roulette, photo opportunities, and live entertainment. There’s even an opportunity for guests to play a 30-foot inflatable Hungry Hippos or fry in a giant inflatable skillet as a fun and free photo opportunity!