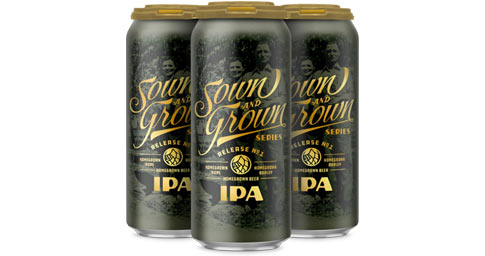 It is nothing new for Bale Breaker Brewing to create an IPA using hops grown just outside the brewery’s doors on the family farm. It’s one of the things that sets the brewery apart from all the other breweries in the world that are not built on the family’s hop farm. So yeah, Bale Breaker creates delicious beers using homegrown hops. This is different.

The company just announced that it will release a series of beers brewed using nothing but homegrown ingredients, including the barley. Loftus Ranches, the farm that the Smith family owns outside Yakima, is best known for producing hops, which the farm has done since 1932. For the first time, this year they also planted barley seed, which was sourced from Skagit Valley Malting. They harvested 70,000 pounds of barley and had two local maltsters, LINC Malt and Great Western Malt, process it. (For you nerds, they produced three types of Copeland malted barley: Pilsner-style, Munich-style, and Vienna-style.)

The first of three beers in the Sown and Grown series will be released on Wednesday, November 27 at the Bale Breaker taproom. Thereafter, find it at select smaller, independent grocers and specialty bottle shops in Washington, Northern Idaho, and Oregon in early-December. Use the Bale Breaker beer finder site to find a location near you.

“With a legacy of trailblazers in my family, it only felt natural to continue to push industry-standards and come out with a 100 percent homegrown IPA, something that very, very few breweries are capable of doing,” said Bale Breaker co-owner and Business Manager Meghann Quinn. “This project is truly one-of-a-kind, where my family personally had a hand in growing all of the ingredients that went into this beer. That’s about as local as it gets.”

The Sown and Grown Series, a limited three-part IPA series of beers, honors the Smith family’s four-generation legacy of hop farming, which dates back to 1932 when great-grandparents B.T. and Leota Mae Loftus planted the family’s first hop field. In 2013, the fourth generation continued the tradition of family-firsts by starting Bale Breaker Brewing Company on the present-day farm. This past year, the family embarked on yet another first—planting and harvesting its first-ever barley crop. The Sown and Grown Series will commemorate those benchmarks by being the brewery’s first-ever 100 percent homegrown beer.

“It was important for us to keep this beer as local as possible, down to the seed, so we were excited to work with some of our favorite regional craft malt sources on this project,” said Bale Breaker co-owner Kevin Quinn.

Be among the first to taste it and take it home when the brewery releases the beer on Wednesday, November 27 at the brewery’s taproom. Find a retail outlet near you.