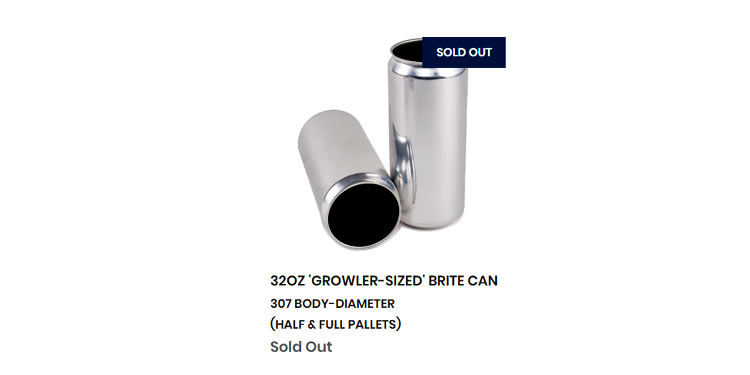 UPDATED 3/26 -The following showed up on Brewbound today.

Ball Corporation has added production of 32 oz. crowler cans and expects to have a supply ready to hit the market in two days.

“Demand for 32 oz. crowlers has surged, similar to other consumer products, during this uncertain time,” strategic communications director Scott McCarty said. “Ball is adjusting our production to help meet that demand. We believe we will have additional cans moving into the market within the next 48 hours.”

The company, which is the nation’s sole producer of 32 oz. crowler cans, increased the size of its planned second-quarter run and is working to expedite shipments when possible, McCarty said.

Ball Corporation, the sole manufacturer of crowler cans, is currently out of the now-precious, 32-ounce aluminum cans. This according to a report on brewbound.com.  The situation leaves breweries and other retailers that sell beer in crowlers to rely on what stock they have on hand.

American Canning is a major supplier of canning and packaging products to the beer industry. The company’s website currently lists 32-ounce crowler cans, 19.2-ounce cans, and 375-milliliter cans as sold out.

Apparently, and understandably, in the wake of the COVID-19 shutdowns, crowler demand has increased to 100 times over the norm. Breweries across the nation are rushing to package their products before the beer in tanks and kegs begins to oxidize. For many breweries, crowlers are the only viable option for doing that immediately.

Ball Corporation says that it only produces the 32-ounce cans once per quarter. When supplies are depleted, the cans are gone until the next round of production. The next production run is scheduled for next month, though it’s not clear exactly when.

Not that anyone in the beer business is excited about spending money right now, but one option is to purchase a can seamer, which will seal 12-ounce 16-ounce and 19.2-ounce cans. Ball Corporation says it has plenty of those available.

You Are Not Alone - Postdoc Brewing releases its version today
Drive-thru brewers market, latest innovation in our new world
Taprooms Reopening Survey - results are in