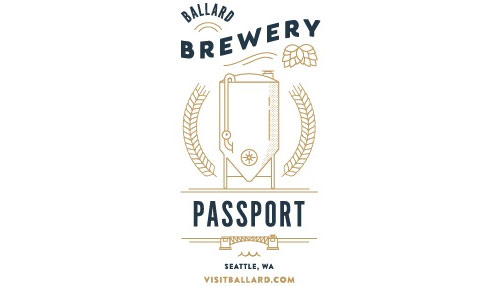 Starting Saturday, January 12th, beer drinkers are invited to pick up their Ballard Brewery Passport and start earning prizes by visiting the 11 breweries that call Ballard home. Start the process by picking up your passport at any of the participating breweries (listed below) or at Hattie’s Hat restaurant in downtown Ballard.

Spearheaded by Ballard Alliance, and made possible by the City of Seattle Office of Economic Development’s Only in Seattle project, the Ballard Brewery Passport program showcases the walkability and quality of Ballard’s brewery district. It is described as an informative map and guide that highlights important details about each participating brewery.

“The Ballard neighborhood has an amazing concentration of talented brewers with a long history of producing some of the finest craft brews in the region and around the world,” said Mike Stewart, Ballard Alliance Executive Director. “We wanted to create a fun way to showcase the Ballard Brewery District and encourage visitors and locals alike to experience all of Ballard’s fabulous craft brewery options as well as visit the Ballard Shopping and Dining District.”

Passport users are encouraged to collect unique stamps from each brewery and redeem completed passports for a prize. No purchase is required, but if you are visiting a brewery and not drinking the beer, what’s the point? You are only cheating yourself.

The two-tier prize system includes a keychain for collecting six stamps or commemorative drinkware for collecting all 11 stamps. Get the keychains at any of the breweries; go to Hattie’s Hat to get your grand prize drinkware. Passport holders are encouraged to use the hashtag #ballardbrewed on social media.