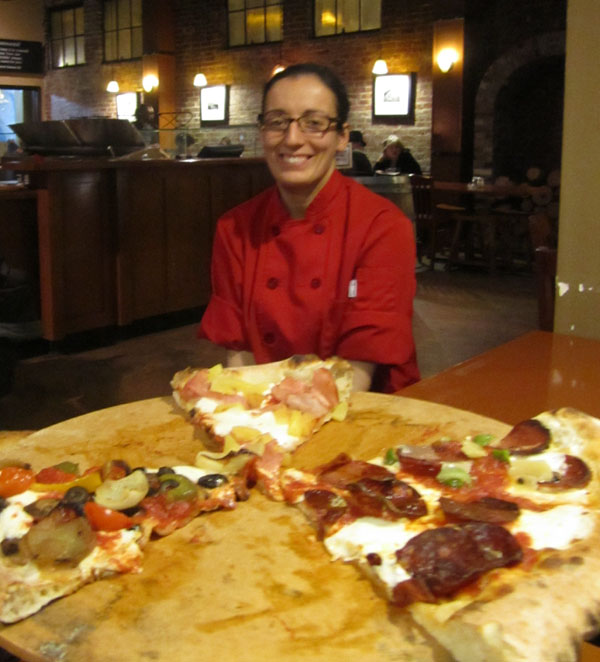 Bambino’s (blog sponsor) is one of Seattle’s best-kept beer secrets. Unless you are a Belltown beer geek, you might not be familiar with this great beer spot that also serves seriously kickass pizza. Somehow, Belle Coelho regularly scrounges up rare, obscure, interesting, and impossible-to-get beers. Sometimes they just fall in her lap. Like the crazy collection of beer she recently served at her Italian Beer Dinner (read our post).

Well, she’s done it again. Or, should I say, it has happened again. To celebrate its anniversary, Bambino’s plans to tap some kegs from Alesmith Brewing, a highly revered and award-winning brewery in San Diego. She will also be giving away some bottles of Westvleteren XII.

Now do I have your attention?

I love telling you about a party. Tomorrow (Saturday, March 30) at 6:00 p.m., Bambino’s will celebrate its anniversary. “It’s been three years since we took over Bambino’s,” Belle Coelho, the owner/chef at Bambino’s, explained on Facebook recently. “We haven’t really celebrated any of the previous years so we decided to make up for it.”

Westvleteren XII. Do I need to say more? Either you know or you don’t. Belle has a dozen bottles of the stuff and she’s giving them away. Don’t ask how she got them. Suffice it to say, she has family in the old country. Need to know more about the beer? Check out the story Huffington Post did about the WXII.

“We will put up a box to enter your names for the Westvleteren XII,” Belle said. “We will actually leave this box up until next Friday for the folks that can’t make it earlier. We will draw next Friday and we will post the winners’ names up on our Facebook page.”

The party kicks off tomorrow at 6:00 p.m. In case you’re unaware, Bambino’s is located on the north end of Belltown, very near Seattle Center at 401 Cedar Street (map). In addition to a rotating selection of excellent beers, you will find amazing salads, pizzas and calzones waiting for you.