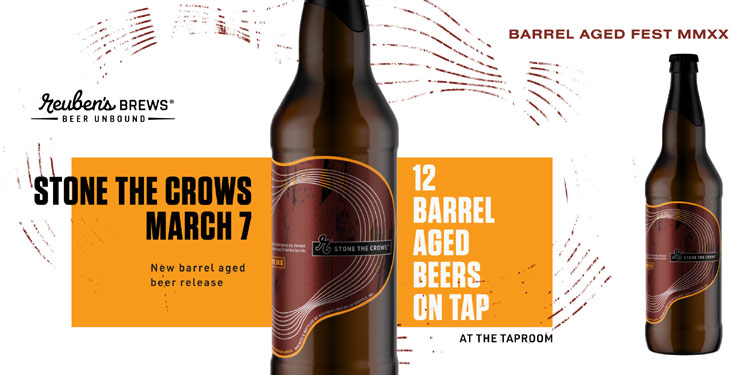 UPDATED: The bottle release has been changed to “on line” –

Reuben’s Brews announces the release of a limited-edition barrel-aged beer, as well as a new year-round IPA. They’ll celebrate the former at this Saturday’s Barrel-Aged beer fest at the taproom in Ballard this Saturday, March 7th. Facebook event page.

Here’s the announcement from the brewery.

A limited, big, barrel-aged brew and a new year-round IPA mark this round of beer releases from Reuben’s Brews.

STONE THE CROWS release day is this Saturday, March 7th and we are celebrating with a BARREL AGED BEER FEST at our Barrel Room during the bottle release.

Stone the Crows is a blend of BBIS MMXIX and Three Ryes Men MMXIX, further aged in a second round of bourbon barrels. This is a complex beer with developed barrel flavors that honors the two award-winning beers that compose the blend.

The entrance for both the bottle release and the festival will be through the regular Taproom entrance. Our barrel-aged beer fest will take place in our Barrel Room, which is located at the rear of our Taproom on 14th Avenue. We will have TWELVE barrel aged beers on tap, available in small pours out of exclusive festival tasting glasses. The beers will come from our cellar and from a few special guests that we will reveal later this week.

No tickets required, but we will be using tokens for the festival which will be for sale at the Taproom when we open at 11am. We hope to see you there!⠀

Mind the Gap! is the newest addition to our year-round lineup of beer and it’s available now at both tasting rooms and will be available around the Pacific Northwest this week!
⠀
Mind the Gap! is a bright and crisp 5.3% IPA brewed for your PNW adventures. Highly drinkable, with big grapefruit and citrus hop flavors, and a refreshing finish. We call this our On-The-Go IPA, and we’re excited for you to try it.