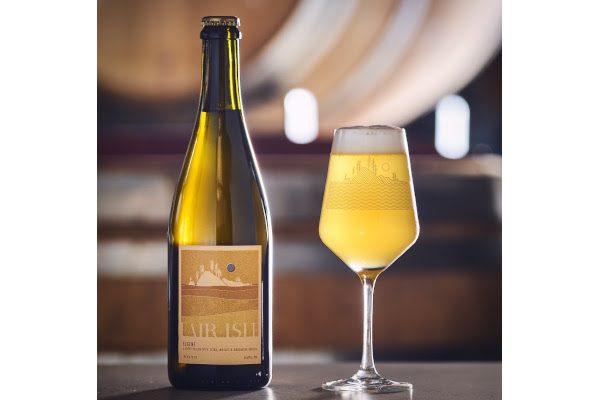 In this IPA-craze world of ours, a lot of people are familiar with some of the hop-related terms brewers use, like dry hop, fresh hops, and wet hops, but what the heck are second-use hops? Maybe it’s a new thing? If breweries do this regularly, you don’t hear a lot about it. Fair Isle Brewing recently released a beer brewed using a second-use hop technique.

This is not the first time Fair Isle Brewing has used this technique. “This is our third beer to use second-use Mosaic hops,” says Geoffrey Barker, owner at Fair Isle Brewing. “The first, Cheri (additionally dry-hopped with Sabro and packaged last November), was so successful, we decided to explore it further. The idea seemed to have legs so we also tried fruiting the second-use Mosaic base beer with Kiwi Berries to create Ana. Sadly, both of those beers are now sold out but we have plenty of Eugene for you to try.”

When talking about grain, brewers refer to this kind of practice as second runnings. It involves brewing with second-use, or second-run grain, usually from a big, grain-heavy beer like a barleywine. Instead of discarding the grain and feeding it to pigs or a composter, brewers make a second batch of beer with it. Imagine reusing a teabag to make a second, less-potent cup of tea. This second batch of beer is considerably lighter (lower ABV, less malty) than the first. The practice has been around for centuries, but this idea of second-use hops is less common or at least less discussed.

Second-hopping and the more common practice of dry-hopping are inextricably related. Dry-hopping beer is not at all a new practice but it is very, very common these days because of the immense popularity of super-hopped IPAs. Dry-hopping is perhaps more common now than it has ever been in the entire history of beer.

Beer writer extraordinaire, Stan Hieronymus, published a story about second-use hops in a recent issue of Craft Beer & Brewing. Read it here. Among other things, Stan points out that researchers at Oregon State University found that spent dry hops retained 77 percent of alpha acids and 51 percent of total oil. In other words, there’s still some oomph left in that green sludge. One brewer cited in Stan’s article referred to the process as “second-generation dry hopping.”

Remember what I said about beers made with second-runnings: lighter body and less ABV than the original. The same would be true for second-use hops. You’ll get some of the hop character but not as much impact as you would with first-use hops. That doesn’t mean they’re useless.

Next to taxes, hops are the most expensive ingredient in beer, so who can blame a brewer for wanting to get as much life out of each pound of hops as they can.

Fair Isle Brewing of Seattle recently introduced Eugene, a beer that utilizes second-use Mosaic hops. They describe Eugene as blurring the line between Saison and IPA. Here’s the release announcement from the brewery.

OBSCURING THE LINE BETWEEN IPAs & SAISONS

Eugene is a saison brewed with Mandarina Bavaria hops, fermented with second-use Mosaic from Bobbi and dry-hopped with loads of Citra.

Dank, with notes of grapefruit, mango, and bursts of tropical citrus, Eugene blurs the line between hazy IPAs and saisons.

Eugene will be on draft Thursday! (Sept. 17)