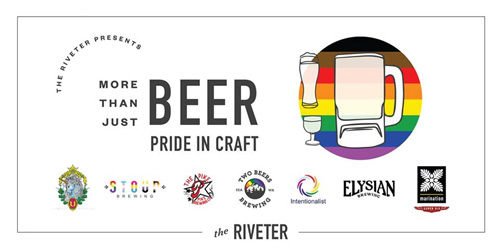 June is Pride Month and several beers, breweries, and events around Seattle are marking the occasion.

Here’s what I know, share what you know in comments below.

“It’s Pride Month in Seattle and we are talking to brewers and bar owners who put inclusivity at the heart of their craft. In an industry synonymous with the hyper-masculine “bro culture,” how do they ensure a safe (and fun!) place at their tables for all sexual orientations and gender identities? What can be done to recruit and support employees who identify as LGBTQIA+? How do they handle discrimination that comes from customers? What proactive measures can be taken to ensure our businesses are truly places where all can relax and enjoy a pint? Join us for this important discussion and, of course, tasty beer!”

“And Justice For Ale, our small-batch release coming in June, debuts at Chuck’s Hop Shop Central District before a night of drag queen bingo! All proceeds from this beer will be donated to PFLAG Seattle. Additionally, Pilchuck Pilsner and Seattle Cider Company’s Berry Rosé and Pineapple Agave will be on tap…”

Look for the following beers at local pride-related beer events around town.

Here is a list of breweries/beers commemorating pride this year:

Know of other beers and/or events? Use the comments below to share what you know.