A few years ago I proudly proclaimed that Seattle’s ballpark had the best beer selection of any ballpark in Major League Baseball. It was easy to make such a claim given everything I’d read and heard about other ballparks across the country. Seattle’s ballpark, at the time called Safeco Field, offered the largest selection, the most local options, and unexpected offerings like sour beers, barrel-aged beers, and even cask-conditioned beer. Admittedly, the beer program was at a zenith and things have normalized a bit at the ballpark, which is now known as T-Mobile Park.

As craft beer has proliferated across the nation in the past few years, it didn’t take long for things to change at other ballparks across America. In April of 2018, I did a story about ballparks with impressive beer lineups (see it), and Target Field in Minneapolis was on that list. Sadly, I haven’t been able to experience every ballpark in Major League Baseball (bucket list), so I cannot comment on all of them, but I recently had the opportunity to visit Target Field and explore the ballpark’s beer scene firsthand. 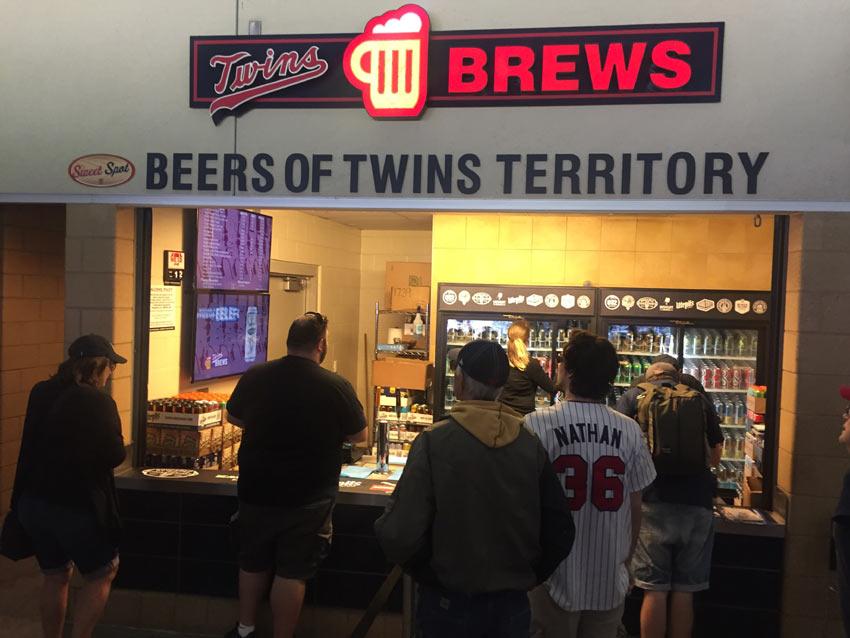 To begin with, compared to my team’s ballpark, T-Mobile Park in Seattle, the home of the Minnesota Twins occupies a smaller footprint and is shoehorned into the heart of the city. That’s nice because it makes it feel very intimate and easy to navigate, yet it still feels like a Major League ballpark. Dare I say, it’s cozy? Target Field might be a bit smaller than some other ballparks, but it is still big on beer.

The bar at the Gate 34 plaza (the right field entrance) has a nice selection of draft beers. You will not be disappointed by the choices here, and since it’s just inside the main entrance to the ballpark, it’s a great place to start. They call it the Gate 34 Experience and it’s pretty darn cool, but it is a bit removed from the real action at the ballpark, the ballgame. 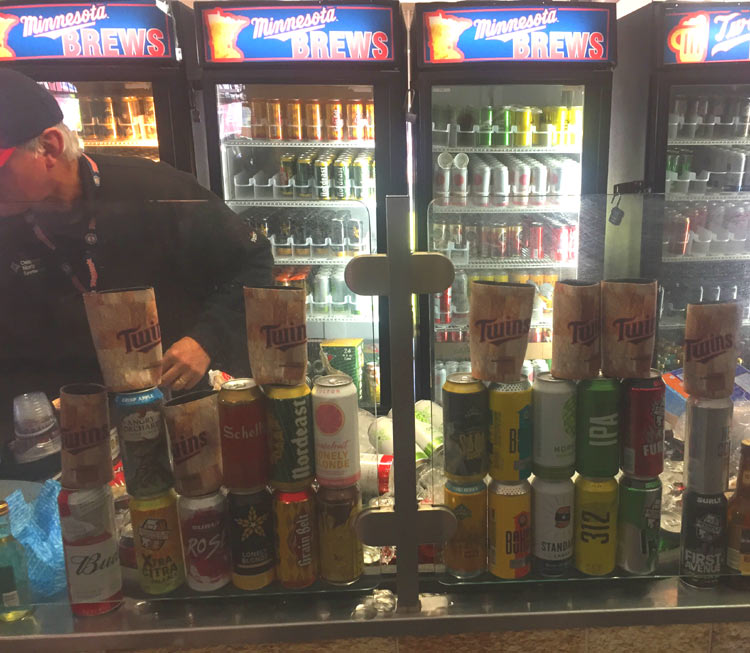 I was suitably impressed by the Minnesota beer stands, Twins Brews–Beers of Twins Territory, serving canned and draft beer. There are two of them on the main concourse and another up in the 300 section. On the main level, one is near home plate and the other is out the third base line towards the foul pole. As advertised, the theme here is locally brewed beers from some of Minnesota’s many breweries, like Insight Brewing, Fair State Brewing, Castle Danger Brewing, and several others. They also had a couple mega-brewery options, but you gotta please the people, even if they are yellow beer bumpkins.

There was also a Minnesota-only beer option out in left field (pictured below). Hands down, this was my favorite beer stop of the day. It was just too easy. Basically, there are a couple of big reach-in coolers filled with cans of beer, which is my preferred beer delivery system for this environment. As the line moves past the coolers, you grab what you want, then the cashier takes your payment and opens the can as your credit card gets approved. Before the game, there was no line, but when we returned during the 4th inning, there were at least a dozen people in line ahead of us. Because of the way this thing works, the line was very fast-moving, which was nice because we wanted to get back to our seats and back to the game.

As I wandered my way around the ballpark, I noticed a lot of other concession stands that offered at least some craft beer choices, both local and not-so-local. Most importantly, I noticed a lot of local beer options that you very likely cannot get unless you are in Minnesota. That’s how I spent my ballpark beer dollars. Drink local, wherever you are!