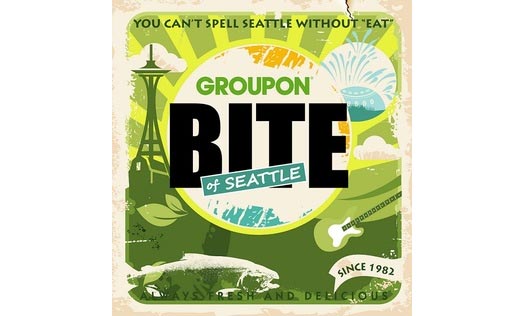 This weekend, the Bite of Seattle showcases over 60 of the area’s best restaurants and specialty food vendors. It’s the city’s largest annual food festival and has been since 1982. This year the Bite of Seattle will also have a special area dedicated to beer, cider, spirits and wines. In all, 38 breweries will pour beer this year, including many local and regional breweries. We list them all below. The event takes place at Seattle Center, July 21-23.

The grownups only alcohol area is located at Fisher Pavilion. This is a festival within a festival and the tasting package cost is $25 –includes a wristband, a commemorative 5 oz. mug and 5 tastes. The wristband is good all weekend and, presumably, you can buy extra tasting tokens. Otherwise, what’s the point?

Once again, the name sponsor for the Bite of Seattle is Groupon, so the event is actually called the Groupon Bite of Seattle®, but that sounds really clumsy, so I choose to simply call it the Bite of Seattle. Also, I’m old school. Here’s a pro tip from an oldster: if you can make it happen, go on Friday afternoon. You’ll be glad you did. Much smaller crowds.

Breweries at The Bite

Happy Hour in the Beer Gardens is each day from 11:00 – 2:00, when guests can get $1 off wine, cocktails or beer. For more details, go to www.biteofseattle.com.