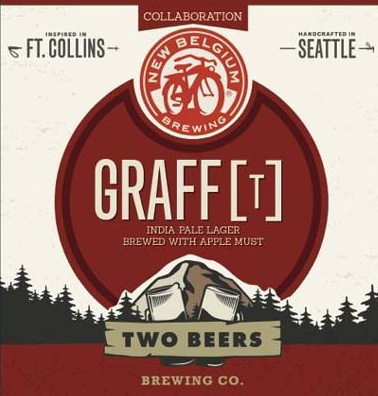 Several years ago, Joel VandenBrink was in Colorado and visited New Belgium Brewing’s remarkable brewery in Fort Collins. While there, Joel had something of a revelation: he decided that, yes indeed, he wanted to open a brewery. The brewery tour at New Belgium was the proverbial straw that broke the camel’s back. Joel returned to Seattle and got to work. About six years ago, Two Beer Brewing (blog sponsor) was born. Fast-forward to 2013 and you find him opening a second fermentation-based business: Seattle Cider Company. Understandably, for Joel VandenBrink this collaborative project represents the completion of a cosmic circle of awesomeness.

A few weeks ago we told you about an upcoming beer dinner at The Sixgill. In doing so, we mentioned a special surprise beer, but we did not share any details about it. Today we can tell you about this very interesting beer, the result of a collaboration between New Belgium Brewing and two of our local heroes. Two Beers Brewing, Seattle Cider Company, and New Belgium Brewing teamed up to create a very uncommon beer. Actually, it’s a Graf, or Graff, or English Apple Ale if you prefer. And it isn’t really that either. GRAFF(T) is a unique concoction.

For the sake of conversation and simplicity, it is a beer. Dubbed GRAFF(T), this beer is an India Pale Lager made with Pilsner malt, Mosaic and Nelson Sauvin hops, and 10 percent unfermented apple juice. GRAFF(T) clocks in at 7.3 percent ABV, 53 IBUs, and is described as a dry, clean, effervescent beer-cider hybrid.

The beer dinner at The Sixgill on Sunday, January 12 will be your first opportunity to drink the beer. Reservations required. On Tuesday, January 14, GRAFF(T) will be officially released at The Woods tasting room at Two Beers Brewing in SoDo. Then, on Wednesday, January  15, Latona Pub (blog sponsor) welcomes New Belgium Brewing, Two Beers Brewing, and Seattle Cider Company for one big brewers night blow out.

Here is the press release with more in formation about the project, the beer and its pending releases:

SEATTLE (January 6, 2014) – Two Beers Brewing, Seattle Cider Company and New Belgium Brewing have joined forces to create a one-of-a-kind graff, a unique style combining unexpected hops and malt with small batch cider from Washington state. Coined GRAFF(T) – a nod to the style of beer as well as the process of bonding a shoot from one plant to another – this 7.3 percent ABV beer was brewed at Two Beers Brewing in Seattle’s SoDo neighborhood using New Belgium Brewing hop varieties and unfermented apple juice from Seattle Cider Company. A truly unique concoction, Seattle-area beer and cider lovers can find GRAFF(T) on tap and in 22-ounce bottles beginning January 12, as well as at a host of launch events taking place around town.

“A graff is an exciting new style we’ve been keeping our eye on and have been dying to create,” said Lindsay Guerdrum, brewer for New Belgium Brewing. “With the recent launch of Seattle Cider Company and their exceptional approach to craft cider, plus their connection with Two Beers Brewing, we saw the opportunity for a unique partnership and more importantly, a beer unlike any other.”

GRAFF(T) is an India Pale Lager (IPL) brewed with 100 percent Pilsner malt, Mosaic hops from Yakima Valley, Nelson Sauvin hops from New Zealand and a 10 percent by volume addition of unfermented apple juice (also known as “must”) from Seattle Cider Company. After fermentation, the brew is then dry hopped with Nelson Sauvin hops. With 53 IBUs and 7.3 percent ABV, the result is a dry, crisp, effervescent beer-cider hybrid with notes of grapefruit and citrus, accompanied by a brite and dry palate.

“It’s a lot of fun to see these three companies come together to offer something completely new to the Seattle market,” added Joel VandenBrink, founder of Two Beers Brewing and Seattle Cider Company. “We’ve looked up to New Belgium Brewing since we opened our doors and are honored to be working with them. Plus, it was a ton of fun to brew this beer together!”

In addition to The Woods tasting room, GRAFF(T) will be available for a limited time in 22-ounce bottles ($5.99) at retailers throughout Seattle including Whole Foods, QFC, PCC, Central Markets and more. Also find it on tap in Seattle area bars and restaurants, as well as a host of upcoming launch events, including:

Sunday, January 12 (6pm): Two Beers and New Belgium Brewer’s Dinner at The Sixgill. Join us for the debut of GRAFF(T) as we celebrate with a five course dinner paired with rare, barrel aged and sour beers and ciders from both breweries. Advance tickets ($60) are on sale now; reserve your spot by calling (206) 466-2846. Visit www.thesixgill.com for more info.

Tuesday, January 14 (3-8pm): Join the teams from New Belgium Brewing, Two Beers Brewing Company and Seattle Cider Company at The Woods tasting room in SoDo for a special on-site release party beginning at 3pm. Enjoy GRAFF(T) as well as sample beers from both breweries and cider from Seattle Cider Company. 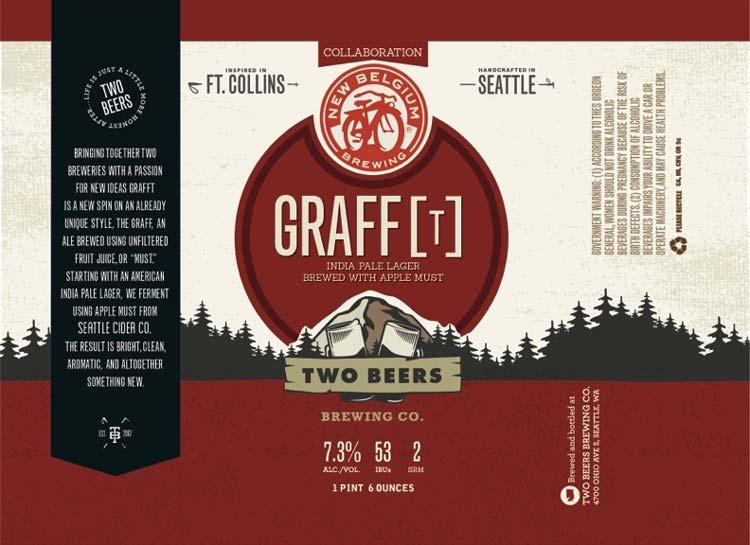