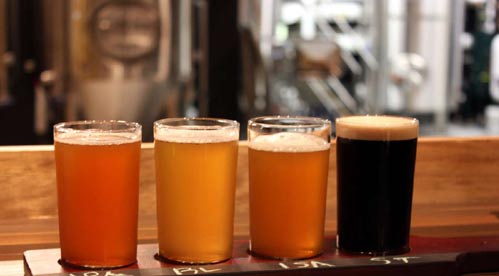 This is a story about the kinds of things that breweries need to understand these days in order to succeed in an increasingly crowded marketplace. Luckily, there are people out there gathering data and analyzing it for the industry. Also, it’s a story about us, America’s beer enthusiasts, and our drinking habits. Of course, our drinking habits relate directly to a brewery’s success.

Sounds like bad news, eh? Among all of the noise about reduced consumption, there is some very good news, which comes from research conducted by Nielsen’s CGA division and analyzed by the Brewers Association in a report released last month. (Nielsen is a leading global information and measurement company that provides market research, insights and data about what people watch, listen to and buy. The Brewers Association is a trade organization representing America’s small, independent breweries.)

As overall beer consumption has slowly diminished, more and more breweries continue to open across the country. Literally, about 5,000 breweries opened in the last 10 years. In general, these new breweries are independent, small breweries. The kind often referred to as craft breweries. 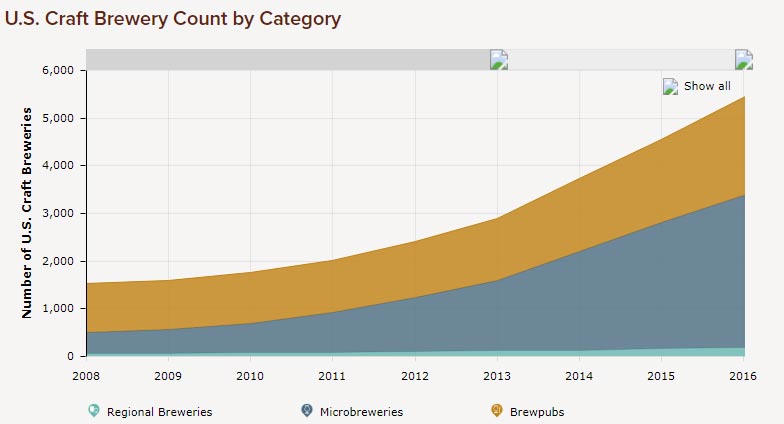 Dwindling beer sales and an increasing number of breweries? What gives? A simple explanation is that Americans are drinking less beer, but more craft beer. That is, the mega-brands have seen declining sales while craft breweries have seen growth in sales. Modest growth in the last few years, to be sure, but it is still growth. It’s not all sunshine and roses, but the sky is not falling.

Beer enthusiasts like to believe that craft beer is the reason the mega-brands are suffering. That is, more and more people are making the switch to the good stuff. There may be a drop of truth in that, but one of the more realistic explanations is that other segments of the adult beverage industry are making hay at the expense of the big beer companies. People are putting down the Bud Light and picking up the spiked seltzer and hard lemonade, for example.

Sure, some people are graduating from Coors Light to India Pale Ale and Imperial Stout, but if that were the only reason for the overall decline in beer sales, well, there wouldn’t be an overall decline. It’d be more like a shift in sales from big beer to craft beer. There is some of that, but other forces are at work as well.

The unavoidable reality of dwindling beer consumption is not good news for the manufacturers of mega-beer, but things are a lot less dire for America’s small, independent breweries. Everyone would love to see overall beer consumption increase, but things could be worse and there is some good news for small, independent breweries.

The report from Nielsen and the recent analysis by the BA complements some other news that I reported a few months ago about on-premise beer sales at brewery taprooms. (See the story.) As that story pointed out, visiting breweries is now officially a thing. More and more people are visiting breweries these days, and they’re doing it to such a degree that it is impacting other types of drinking establishments. Good news for the local brewery taproom, but bad news for the corner bar.

According to the study, people who did not visit a brewery were more likely to report a decrease in beer consumption. Fewer of them responded with the “somewhat more” or “significantly more” response.

Who is Visiting Breweries?

If you look at the study results (see the table below) you start to see who is really drinking more beer. Of that 29 percent who are drinking more or significantly more, people between the ages of 21 and 34 are more likely to have provided those favorable responses. I am not sure if there is anything we can do to help change the minds of those people who responded with “significantly less beer” or “somewhat less beer.” Like I said, there are other forces at work. More choices, increased interest in health and wellness, and stuff like that.

Is there a tidy little conclusion to draw? Does all of this lead to a clear plan of action for breweries bent on success? I don’t know, but it is certainly noteworthy, especially if you’re putting together a marketing strategy for a brewery.

You can see more info about this Nielsen study here, along with a lot of other interesting, valuable market research.