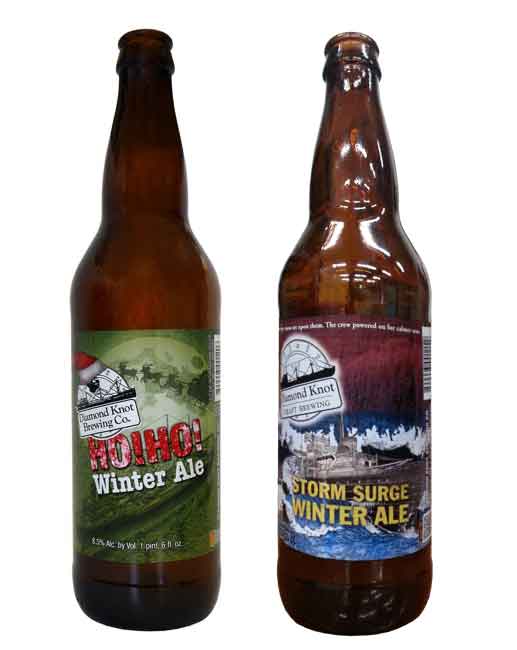 Here is a beer release notice from Diamond Knot Brewing:

MUKILTEO, WA – Of course it’s still October, but there’s no date too early to begin the snow dance. The brew crew at Diamond Knot Craft Brewing says “Bring on Winter!”

“Many of our beers have fans, but there’s nothing like the Ho!Ho! cult that seems to jump from the woodwork when October rolls around,” said Sherry Jennings, Diamond Knot’s director of Sales & Marketing. “The Ho!Ho! fans are first in line in July, too, when we host different Christmas in July events. I wouldn’t get inbetween them and their Ho!Ho! pints.”

Two years ago, the company released Storm Surge Winter Ale, a beer that surprised many winter beer lovers with its lighter body. Darker-than-dark with the “staining” from Midnight Wheat, the beer is simply sessionable with an ABV of 5.9%. There is a definite complexity to the malt character of this seasonal beer. The brew team uses German Carared, Caramel and Munich malts, then layers on loads of Chinook, Cascade, Simcoe and Columbus hops. Surprisingly, even with all the hop additions, IBUs stand at 30. You’ll find the hops up front, with the roasty malts completing the experience.

The Storm Surge season runs from October to mid-February, while the Industrial Ho!Ho! has a shorter holiday season.

Industrial Ho!Ho! Winter Ale, brewed for almost 15 years, is a definite winter favorite. Ruby red in color, this is undoubtedly a winter warmer with a 8.5% ABV. It’s hoppy – 60 IBUs – with a balanced residual sweetness. If you ask our VP of Brewing Ops Pat Ringe, he’ll tell you this is his favorite beer. It was also the first recipe he created when he came to Diamond Knot. Ho!Ho! season is usually a wrap by mid-January, when the holidays have outstayed their welcome and the Christmas trees once again head to curbs for recycling.

Both beers are pouring at all Diamond Knot locations, as well as ale houses and restaurants throughout the area, and can be found in 22oz bottles at grocery stores and select specialty bottle shops.
Founded in 1994, Diamond Knot Craft Brewing is a privately held company and Snohomish County’s oldest continuously-operating, independently-owned  brewery. Handcrafted Diamond Knot ales can be found in 12 states, British Columbia and Japan, both in bottles and on draft.  Additionally, Diamond Knot operates three production breweries and two full-service restaurants in Washington; the Brewery & Alehouse in Mukilteo and the Brewpub @ MLT in Mountlake Terrace. Diamond Knot prides itself in providing craft beer, exceptional food and lively experiences, as well as being charitable members of the communities in which it operates.