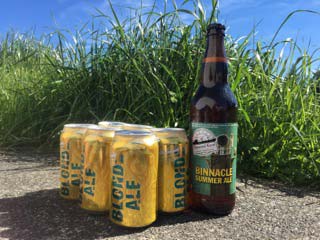 After the decision was made to transition the company’s beloved Blonde Ale into year-round 12-ounce 6-pack cans, the brewers developed an ale perfect for an easy quaff session on warm days. Welcome, Binnacle Summer Ale!

“This beer is absolutely a home run,” said Production Manager Brian Guerrant. “The style started with a brewers challenge and grew from there. It’s definitely outside of what we have created in the past.”

Binnacle Summer Ale is so good, DK staff is finding it difficult to keep their hands off the beer until after its launch date, April 1.

“It’s been tough,” Guerrant said. “We’ve even been fighting over the short fills on the bottling line.”

What makes this beer so special is that unlike all but one of DK’s beers, it uses Belgian yeast. Not striving to create an authentic Belgian-style beer, the brewers switched from a pilsner malt to 2-row pale malt, and the drinkability shot through the roof.

“We went with the binnacle because we really felt we were setting out on a new course,” said Sherry Jennings, the company’s director of sales and marketing. “There is a fair amount of symbolic meaning with Ken’s binnacle. Not only are we elevating our summer seasonal, we’re also putting one of our most popular beers, the Blonde Ale, into cans for year-round package distribution.

“Sales of the Blonde have been growing rapidly over the past few years, so when people tell us what they like through consuming our beer, we listen. A year-round can was the perfect transition for this style.”

Beer Release - Beaktweaker Citrus IPA, Black Raven Brewing
How a beer goes from a whim to a winner at Reuben's Brews
Chuckanut Brewery bottles its Single Hop Lager for the first time