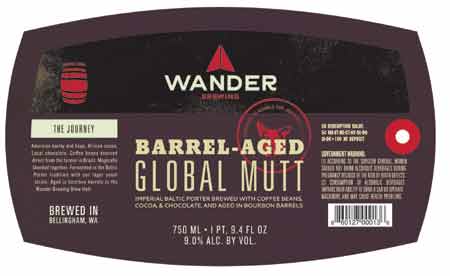 Here’s the info from the brewery:

Wander Brewing is excited to announce release #2 from our Wander Barrel Project, Barrel-Aged Imperial Global Mutt Baltic Porter. It will be available in 750 ML bottles at the brewery beginning today, Friday, April 24th, and will subsequently be sold at select retail locations. There will also be a limited amount on draft, available at the brewery and a handful of establishments in Bellingham and Seattle.

We chose to brew an imperial version of our coffee cocoa Baltic Porter, Global Mutt, and placed it in the hands of Heaven Hill 12-year bourbon barrels for ten months. The results are superb. The beer resembles fresh French Press coffee, topped with a fluffy head of espresso foam. Aromas of dulce de leche and blackened marshmallow are complimented by a full, resonant mouthfeel, and flavors of baker’s chocolate, burned toast, brownie batter, and molasses.

Wander Brewing was founded by Colleen and Chad Kuehl in the spring of 2014. Our mission is to craft beers that balance tradition with innovation. Beers that seem familiar but leave a fresh impression of something new—kind of like seeing an old friend after years apart. We enjoy maintaining a continuously changing series of ales and lagers, and refuse to compromise on quality and taste as we move from one batch to the next.