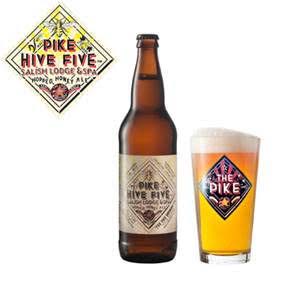 Northwest spring time in a glass.

Pike Hive Five is a tasty collaboration between Pike Brewing Company and Salish Lodge & Spa. Salish has 120,000 honey bees that live in their apiaries, which produce 600 pounds of superb and local honey every year. Our brewers use this honey to brew Pike Hive Five. This is the first time that Pike Brewing Company has offered Pike Hive Five as a seasonal beer. Up until now it was only possible to enjoy this beer at the Salish Lodge & Spa.

Pike Hive Five is available now as a seasonal release. You can find it in 22 oz. dinner bottles and on draft. Take a look here for stores, bars and restaurants that carry Pike Brewing Company beer.

About Salish Lodge & Spa: Consistently ranked among the best small resorts in the world, Salish Lodge & Spa overlooks the 268-foot Snoqualmie Falls. Nestled in the foothills of the Cascade Mountains, every guest experience is inspired by its surroundings. Honey and herbs from the lodge’s own apiary and garden appear in treatments at the world-renowned spa, as well as the locally sourced Northwest fare and libations in The Dining Room and The Attic. Each of its 84 guest rooms has a fireplace, two-person whirlpool tub, and balcony or window seat. The resort is located 30 minutes east of downtown Seattle and within 40 minutes from Seattle-Tacoma International Airport. Salish Lodge & Spa is owned by the Muckleshoot Indian Tribe and managed and operated by Seattle-based Columbia Hospitality, Inc. For more information or reservations, please call 800-2-SALISH or visit www.salishlodge.com.