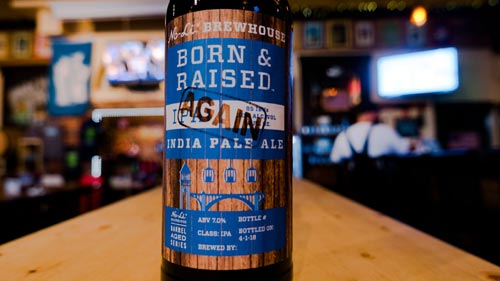 “We’re excited to finally release a barrel-aged version of this IPA. We know there’s a lot of hardcore Born and Raised fans out there, and we think they’ll enjoy this version,” says No-Li Head Brewer Ryan Brookhart.

Born and Raised Again is the latest release from No-Li Brewhouse’s  barrel-aging program. Currently, there are 82 barrels in different stages of aging stored throughout the No-Li pub and production facility. This is the sixth barrel-aged beer they’ve released thus far in 2018.

The beer is described as featuring bold, piney flavor of the original IPA, accented by flavors of whiskey and caramel. If you want to sample this uncommon beer (a barrel-aged IPA) you will need to visit the No-Li Brewhouse pub in Spokane, where they’ll be selling bottles. Supplies are limited, so do not delay.