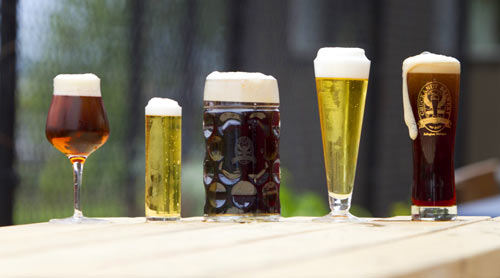 Chuckanut Brewery recently announced the release of its early spring seasonal beers. The list includes two beers that are distinctly about March. First, a Dry Stout just in time for St. Patrick’s Day. Second, a Marzen, a German-style beer that is traditionally released in March (Marzen is actually the German word for March). But hold on, there’s more! Here’s the complete announcement from the brewery.

Spring is in the air, the sun is showing its bright face bringing beer to our mind! Chuckanut has the crispies to keep you going as the weather warms and you get more active. The newest Chuckanut collaboration is with Zeeks Pizza called Zealander Pilsner. The big kahuna of this sessionable pilsner is the New Zealand grown hops Rakau and Wai-Iti. These hops play together to give the beer a mixture of stonefruit, lemon and lime notes against a malt backbone of classic German Weyermann malts. Crisp, hoppy, and bold the Zealander Pilsner is begging to be had with your next slice of pizza.

Chuckanut’s Irish Dry Stout will be out soon, just in time to celebrate St Patrick’s Day. Different from our regular winter seasonal Stout this traditional Irish style stout has an espresso-like flavor from the use of roasted malts. Lower in alcohol it finishes dry and crisp and is made for celebrating. Very similar in tastes to the granddaddy of all stouts “Guinness” but more local!

Marzen Lager (March Bier) appears later in March to help celebrate spring. In Germany this style was held in ice caves and brought out in March at the beer gardens. Amber and incomparably smooth with a round and slightly sweet palate, its spicy flavors complement the deep toffee-like aroma. Chuckanut Marzen has an appetizing bitterness that serves to balance rather than challenge the malt underpinnings. Its complicated malt bill makes this traditional Marzen one of the most tantalizing of lagers! Great with burgers and bbq now that the weather is changing and we start grilling.

Don’t forget the Doppelbock that was released for Valentine’s day. Third in our big bier series this is a smooth, dark rich lager with lots of dark, dried fruit flavors and a balanced clean finish. Watch out for this beer with its 7.4% ABV it’s a lot easier to drink than you think!

Citra Leaf Pilsner continues its roll as the hoppy lager of choice. Using Yakima Chief Citra Leaf hops in a basic Chuckanut Pilsner recipe this beer is for the hophead that wants a clean, citrus inspired crispy Pilsner. Chuckanut intends to continue to brew this delightful hoppy lager year round. If you don’t see it in your favorite beer joint, ask for it. It’s becoming a big favorite of Chuckanut fans.

Chuckanut Brewery & Kitchen, located at 601 West Holly St, Bellingham, was awarded the National Small Brewpub/Brewer of the Year 2009 and National Small Brewery/Brewer of the Year 2011 at the Great American Beer Festival in Denver, CO. The full service “Kitchen” is open daily at 11:30 am to guests of all ages with an eclectic fresh local menu. The South Nut Skagit Tap Room & Brewery at 11937 Higgins Airport Way, Burlington is open for all ages too. Check out additional information about Chuckanut Brewery at www.chuckanutbrewery.com.