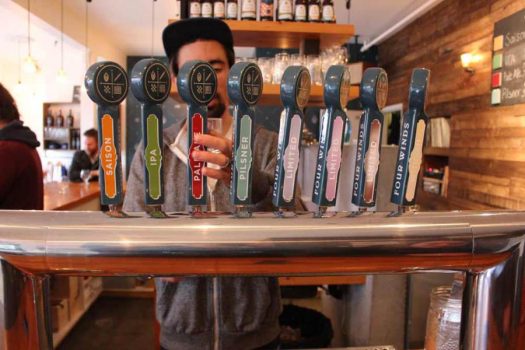 This is the second of two stories we recently posted on Go Find Beer (our other, travel-focused blog) about the current state of the booming beer scene in Vancouver, BC. Reposted here on the Washington Beer Blog. See the previous story here.

(Originally published Feb. 27, 2015) In Vancouver BC the beer scene is growing and changing in the blink of an eye. We made a recent trip up to see what’s new, and while we focused our attention on the burgeoning East Vancouver area, we also made a few other enjoyable beer touring (and other) stops in the greater Vancouver area:

Central City Brewers – 11411 Bridgeview Drive, Surrey.
Located in Surrey, about 30 minutes from Downtown Vancouver, Central City just increased in size exponentially from their original brewpub with small brewhouse to a massive new production facility and taproom. That gave them room to undertake ambitious sour and barrel-aged programs in addition to churning out loads of their regular beers. Round that out with a distillery and plans to make cider. The taproom is Disney-like with tons of merchandise, art and beer by the taster, pint or growler. The brewery offers tours on the weekend, but be sure to book in advance.

Four Winds Brewing – 4-7355 72nd St, Delta.
In a business park in Delta, BC, south of Downtown Vancouver, Four Winds is making a splash. Of all the recommendations we received prior to our trip, this was the most highly touted new brewery by far. Somehow, a la Black Raven Brewing, they turned their business park taproom into an elegant, cozy tasting room where they are doing it family-style: brothers, uncles, long-time family friends are combining to brew, pour and sell their beers. We liked their entire line-up, but two beers were good enough that we grabbed a bottle to bring home: their Nectarous dry-hopped sour, and their Phaedra Belgian rye IPA.

Tap and Barrel – 1055 Canada Place.
This small Vancouver chain of restaurants has a strong focus on locally produced beer and wine. The Convention Center location is convenient to many downtown hotels, with 36 beers on tap, plus over 20 local BC wines on tap. We enjoy their friendly and knowledgeable service, and their solid pub menu line-up focusing on locally sourced foods.

There’s a lot more to the story. Finish reading it here.