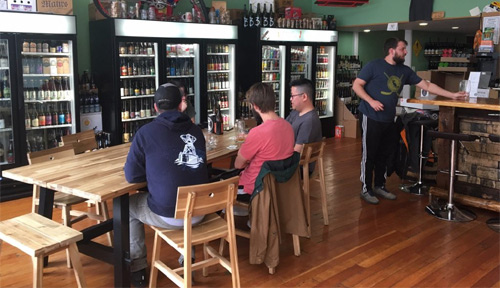 A few weeks ago, we packed up the Washington Beer Cruiser and headed down to the mouth of the Columbia River. Our purpose was twofold: volunteering for the annual Washington CoastSavers Beach Clean-up, and spending an afternoon catching up on good eatin’ and drinkin’ in Astoria, Oregon. Handy thing, Astoria is only about 30 minutes south of Cape Disappointment State Park, so it was easy to kill both those birds with one roadtrip.

Astoria makes for a great overnight or weekend destination from the Seattle area. On a Thursday morning, we got there in just over three hours. With a working waterfront, blue collar roots and an artsy vibe, Astoria reminds me of Port Townsend as much as anything. You could easily spend a weekend wandering the historic downtown, alternating between shopping, seafood and tastings at breweries, cideries and distilleries. But with just one afternoon, we had to focus on beer touring.

We started with lunch – salad and a beer – at Astoria’s granddaddy brewery, Fort George, which has been brewing beer there since 2007. Their original brewery is cobbled together with a city block full of comfortable and welcoming brewpub spaces that are all ages (until 10 p.m.). Explore the large main level brewpub, an upstairs pizza joint, a taproom nook that looks out to the brewery, plus a dog friendly patio for outdoor seating.

After lunch, we strolled down the block to Reach Break Brewing. Located in a food truck courtyard, Reach Break is adjacent to Reveille Ciderworks making this a nice two-fer stop. Both taprooms have a small indoor seating area, but the sun was shining, so we tried some samples then settled into a beer garden picnic table with an IPA then a cider.

While we were at the Reach Break Brewing beer garden, we happened to meet the proprietor of the Bridge & Tunnel Bottleshop and Taproom, which is just across the street and a half block down. We stopped by for – ahem – camping supplies, and noted the thoughtful taplist in this cozy establishment.

A trip to Astoria isn’t complete without a visit to Buoy Brewing. Located in a vintage maritime wharf perched over the Columbia River and most recently used for fish processing, Buoy’s brewpub is famous not only for their great beer, but also their plexiglass floor area where you can get up close and personal with the sea lions below. (Kids can’t get enough of it.)

Like Fort George, the brewery has several areas to enjoy – the main restaurant is all ages, with a wall of windows overlooking the river. In addition to the main restaurant, more seating is available in a taproom plus a dog-friendly patio wraps the outside spaces when the weather cooperates. That’s where we enjoyed a beer with a plate of local Willapa Bay oysters.

As happens with visits to many of our Northwest towns, we felt like we needed more time for this trip to Astoria. There’s far more to do and taste than we could fit into a single afternoon, including a Rogue Brewing outpost, an ice cream and French fly place called Frite and Scoop that more than one person recommended but we missed this time, plus a downtown distillery, multiple coffee shops, cocktail lounges and at least two other bottleshop taprooms. Be back soon, Astoria.

A FOMO-free beer weekend in Portland, Oregon
The Summer of the Beer Garden - our favorite beer gardens of 2020
Enjoying great beers in the great outdoors of Port Townsend, Washington