There are plenty of reasons why you might find yourself in the beautiful part of the world known as the Central Coast and, more specifically, the town of Monterey, California. Maybe you’ll be there to visit the world famous Monterey Bay Aquarium. Perhaps you’re a car lover who has always dreamed of attending Monterey Car Week and the Concours d’Elegance, held in August each year. For many avid golfers, playing a round at Pebble Beach is a bucket list activity. Perchance you fancy a walk on a dramatic beach or a hike through the dark forests and lush green hills of Big Sur. There are just so many reasons you might choose to visit this happy corner of the Universe. Pick one and go.

When you do find yourself in Monterey, you will need to know where to get the best beer. That’s where I come in. Below, I share my favorite beer stops in Monterey, California.

On the main drag in old downtown Monterey, Alvarado Street Brewing operates a brewery and pub. As far as the city’s beer scene goes, this is the real gem and should not be missed. It’s not exactly an old fashioned, low-key brewpub; it’s more like a modern gastropub that brews its own really good beer. Really, really good beer. As in, GABF medal-winning beer.

The restaurant is always busy, so put in your request for a table and head out the back door to the beer garden where they’ll pour you a pint or sell you beer to go if you can’t stick around for a meal.

There is a brewery onsite, but the bigger brewery—the one that creates enough beer to allow them to package and distribute their product—is located in Salinas, about 30 minutes away.

At Alvarado Street Brewing’s production brewery in Salinas, by the way, you can drink a beer in an industrial setting, surrounded by towering stainless steel tanks and stacks of oak barrels. The taproom at the brewery is beer only. Both locations welcome kids.

This ballyhooed brewery, which is headquartered a couple hours north in Berkeley, operates a few satellite taprooms around the Bay Area and beyond, including the Fieldworks Beer Garden in downtown Monterey. It’s a very modern kind of beer garden, save for the familiar, Bavarian-style communal beer garden tables and benches.

Truly, it is a beer garden in the sense that it is all outdoors. The bar, the walk-in refrigerator, and the bathrooms are cleverly fashioned from old shipping containers. The seating area is covered in some places and uncovered in others. Propane-fueled heaters and fire pits keep you warm during the winter months and on those cold, seaside Monterey nights. You can even check-out, or buy, a blanket.

As for the beer, Fieldworks will not disappoint, whether you are into IPAs, sours or anything else. At the Beer Garden they serve an impressive array of beers and it would be silly to have just one. Stay awhile. Taster flights available. Kids are welcome.

This cavernous brewpub is tucked away in a corner just off the Custom House Plaza, which is down by the marina. I could spend a paragraph explaining how to get there, but will instead just tell you that if you cannot find it, ask someone in one of the other shops. Google maps will only get you close.

The beers here are solid and you’ll likely find at least one or two to your liking, but perhaps the most notable thing about Peter B’s is that it’s a brewpub with a sport bar vibe. I don’t mean that in a bad way. It’s a nice place, but there are plenty of TVs broadcasting sports, which is something your rarely see in a brewpub. 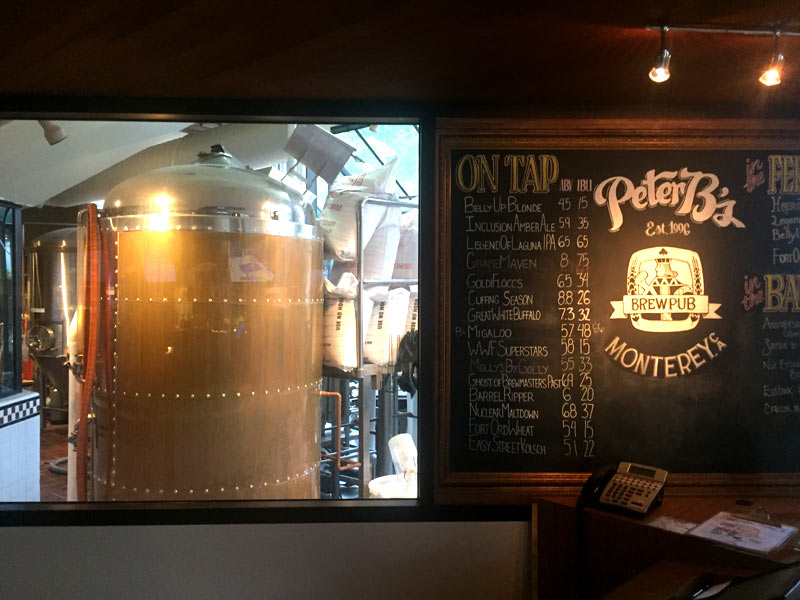 Peter B’s is connected, physically at least, to the Portola Hotel and Spa, which is one of the fancier hotels in Monterey. No doubt the brewpub aims to accommodate that crowd. While I enjoyed the place and the beers, it was hard to return for a second visit with Alvarado Street Brewing and the Fieldworks Beer Garden just a few blocks up the street. However, if there’s a big game on TV, this is the place. Yes, kids are allowed.

Okay, there’s nothing spectacular about the beer here, but they have a couple of decent craft brews on tap and there is simply no better place around Big Sur to drink a beer. Nepenthe is a restaurant and bar perched high on the cliffs overlooking the grandeur of the Central Coast. It has been family-operated for three generations. It’s a special place. In Greek, Nepenthe means isle of no cares.

It’s the kind of view that photographs do no justice. It is simply too grand.

Pro Tip: Hike one of the trails in nearby Pfeiffer Big Sur State Park (plenty of options for that) and then head a few miles south to Nepenthe for lunch and a beer. You will thank me later.

As the name suggests, the focus here is on traditional English-style beers, though they have now expanded their lineup to include some slightly hoppier, American-style beers. The brewery and pub is located about 10 minutes north of Monterey, just off Highway 1 in the town of Marina.

The food menu is not exactly heavy on traditional English fare, but they do have fish and chips, and although I have not eaten them personally, I hear very good things. If you’re coming into Monterey from the north, say from the airport in San Jose, this place is an easy first stop.

Interestingly, it seems Monterey is home to an abundance of English-style pubs. Maybe it’s because of the city’s historic, seafaring past, I don’t know. I poked my nose into a couple of these pubs, did some research online, and was disappointed to find uninspired beer lists that looked like they were hand-picked by the local Big Beer distributor: Shock Top, Blue Moon, and occasionally something from 10 Barrel, Elysian or some other brewery recently acquired by one of the Big Beer companies. Explore at your own risk.

If you use a resource other than this one to find breweries in Monterey, you will discover Cannery Row Brewing, which is not actually a brewery. It’s a restaurant and bar with a large but mediocre draft list that includes a couple of beers brewed by someone else and branded as house beers. I was disappointed. If you call yourself a brewery, I expect you to brew beer. Seems reasonable.

The Summer of the Beer Garden - our favorite beer gardens of 2020
Enjoying great beers in the great outdoors of Port Townsend, Washington
Otherlands Beer arrives on the Bellingham beer scene