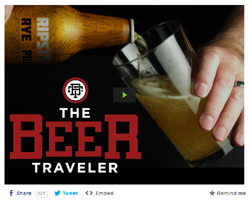 Some of you get your noses out of joint when I talk about breweries using Kickstarter to help fund their start-up costs and/or growth. This is different. This isn’t about helping one brewery, this is about helping spread the gospel of craft beer.

The Beer Traveler is a TV show about craft beer, craft breweries, and the positive impact that craft beer is having on the economy. Sure, there have been some attempts at TV shows about craft beer, but I think they ultimately fail because the people behind the scenes do not really have a passion for beer. Charlie Herrin is the producer and host. He is The Beer Traveler. Like most of you, Charlie is a lover of great beer. He is confident that he can get the attention of some television networks if he can put together some content (episodes) to present. I don’t disagree. What he’s done thus far on basically no budget is pretty amazing. He’s produced videos that exceed what you might expect. I think it is worth considering helping him realize his dream of telling the stories of craft beer on major network television.

I don’t like to tell people what to do, especially with their money, but it would make me happy to tune in each week to a new episode of The Beer Traveler and watch as Charlie introduces me to a new brewery. Compared to a lot of Kickstarter projects I’ve seen, The Beer Traveler seems to be very well thought out. Very specific. Watch the video, visit the Kickstarter page and do what you will. You can also visit Beer Traveler TV on YouTube and see what they’ve done thus far without any real funding.