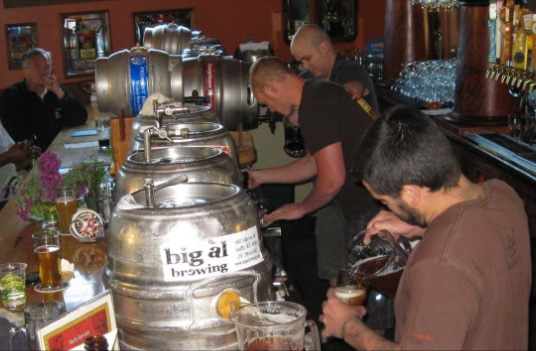 To some observers it seems counter-intuitive, maybe even ironic, but nobody ever said Seattle Beer Week (May 7 thru May 17) was supposed to be about Seattle beer. There are no shortage of great beer events to satisfy your thirst, but many of them (maybe most of them) have nothing to do with Seattle-brewed beer or even Washington-brewed beer. I’m not complaining, I’m just pointing out the fact.

Whether it is by serendipity or by design, Beveridge Place Pub flies in the face of that tendency and celebrates Seattle Beer Week with, in large part, Seattle-brewed beer and Washington-brewed beer. So if you grow weary of celebrating California Beer in Seattle Week, swing by the Bev and enjoy some local product. Given the largely provincial nature of this blog, it seems fitting that I give Beveridge Place Pub some credit.

Seattle Cask-O-Rama
(Thursday, May 7 and Friday, May 8)

Seattle Beer Week kicks off at Beveridge Place Pub with a bevy of Seattle-brewed beers. Firkins upon firkins of fresh beer lined up along the bar poured the way God intended. Enjoy 18 different cask-conditioned beers from 19 different Seattle breweries: one is a collaboration beer by Naked City Brewery and Outlander Brewing. Taster trays (self-designed flights) available.

The good news, 19 of Seattle’s breweries will pour at the event. The bad news, more than 30 will not. Seattle is home to over 50 breweries. The list of breweries pouring at Seattle Cask-O-Rama is below.

We understand that this year there is greater diversity in style than in years past. For instance, a barrel-aged lacto saison, a brett saison, a pilsner, a couple of stouts, a few pales, and of course enough IPAs for all you hop heads.

By now, you probably know how it works. Two breweries are given two special ingredients which they must incorporate into their beer. The two beers go head-to-head and the crowd votes in a blind tasting format. It’s based on television’s Iron Chef.

For the Throwback Throwdown Triple Header, a total of six breweries will compete. Beveridge Place Pub has been doing Iron Brewer showdowns for six years and the ingredients involved in the three showdowns represent some of the best matchups of the past.

Brewers and guest are encouraged to come dressed in throwback costumes. Come dressed as Don Johnson from Miami Vice, or a 60s flower child, a caveman, or whatever. Anything goes on Iron Brewer night.

The official annual release of Bob’s Brown Beer (6:00 PM tapping). While Georgetown Brewing will host the official party across town at Nickerson Street Saloon, which is an annual tradition, the Beveridge Place Pub will also host a release party starting at 6:00. Come enjoy a pint of Seattle most philanthropic beer.

To date, Bob’s Brown Beer has raised over $400,000 for Ronald McDonald House Charities.

Enjoy an impressive selection of barrel-aged brews, sour beers, fruited and spiced beers. They’ll be available in cleverly designed flights. While not all of the beers are local, this year it just so happens that a lot of them are local. Of the 25 bodacious brews, 10 of them are from Washington breweries. Also, there will even be a dessert flight this year, which should be interesting.

This Is Washington, Dammit!

And there may be more