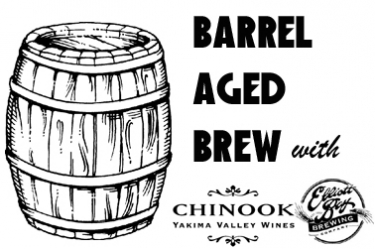 Next Wednesday, Brave Horse Tavern is tapping into a very special barrel of beer. For the past year, Elliott Bay Brewing Company’s Imperial Porter has been patiently resting in a Cab Franc barrel from Chinook Winery. At the event, you’ll be able to taste the beer, the wine, and the barrel-aged beer. Doug Hindman, Elliott Bay Brewing’s Brewmaster, will be there as will the winemakers.

Of course no event at the Brave Horse Tavern would be complete without food. The kitchen will serve up some tasty pairings. This won’t be a formal, sit-down affair. It will be more of a casual, stand-up, at-your-own-pace, type of affair. For those of you who have yet to attend a beer + food event at Brave Horse Tavern, you’re really missing something. I cannot say enough good things about the events I’ve attended.

Tickets are available online for $30. Here are more details.

We’ve been aging an Elliott Bay Brewing imperial porter in a Chinook Winery cabernet franc barrel for a year and it is time to drink it. Come hang out in the Tack Room at the Brave Horse Tavern on Wednesday, February 6 to try this fun collaboration along with all of the flavors that influenced the project from the base beer to Chinook wines. Brewer Doug Hindman and winemakers Kay Simon and Clay Mackey will be in attendance. We’ll also be serving some deliciously paired food.

Two easy ways to give the gift of beer this year
Pike Brewing 2020 release schedule includes an homage to the Hop King
Early reports suggests 2019 was another year of slow, spotty growth for craft beer