For me, it was one of the highlights of Seattle Beer Week: a beer+food pairing dinner at Trellis featuring the beers of Hopworks Urban Brewer (HUB). I have an admitted beer crush on HUB, which should surprise no one. For some time I have heard amazing things about Trellis—the restaurant located in downtown Kirkland’s Heathman Hotel. When presented with the opportunity to attend this particular event, my response was affirmative and immediate.

I was not disappointed. In fact, I was so impressed with both the food and the selection of beer at this dinner that I contacted the Heathman Hotel and Trellis restaurant and put together a promotional package for the Washington Beer Blog. I will tell you more about our big give-away in the coming days. It is a pretty amazing opportunity, I will tell you that much now.

I learned a few things at dinner that night. For example, I knew that Trellis takes pride in using local, fresh ingredients, but I did not know that Chef Brian Scheehser has a 10 acre farm near Woodinville that supplies the restaurant with fresh produce. Until the chef enlightened me, I never would have considered serving a piece of perfectly cooked salmon atop a slice of spicy sausage. I also learned that Chef Brian is a big fan of craft beer. It would be an understatement to say that I was impressed with his ability to pair delicious beer with his amazing food.

The meal was nothing short of fantastic. Among the impressive assortment of appetizers, I was particularly impressed with a clever play on fish-n-chips: fresh smelt, breaded and fried whole, then served in a paper cone. The smelt looked more like chips than fish.

Three of the meal’s five courses featured pork from Tails and Trotters Artisan Meats. Located near Portland, Tails and Trotters raise hogs with old-world style—the farmers grow the hogs bigger and fatten them up on a special diet of hazelnuts as they near the end of their piggy lives. This “hazelnut finishing” lends a noticeable depth of flavor to all of the meat. Every bite of pork that touched my lips was superb, but perhaps the big star of the show was the Cider Glazed Pork Chop served with Ace of Spades Imperial IPA. These chops were, literally, the size of my head. 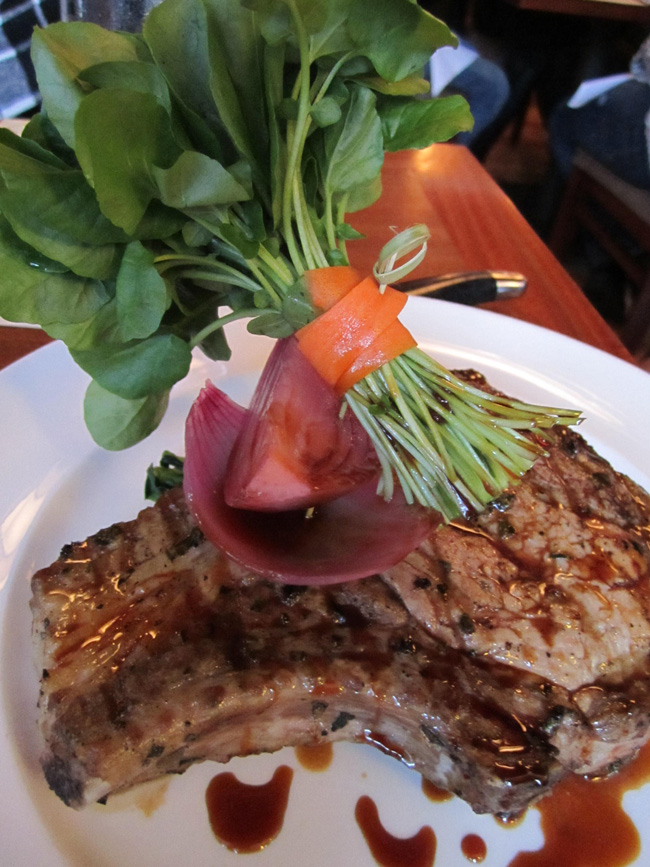 Of the five main courses, my favorite was the Spicy Sausage and Salmon Cioppino. I know it sounds odd to serve a beautifully cooked piece of salmon along with a spicy sausage in a tomato-based sauce, but the three elements of this dish complimented each other perfectly. Paired with HUB Rise Up Red, it was divine. 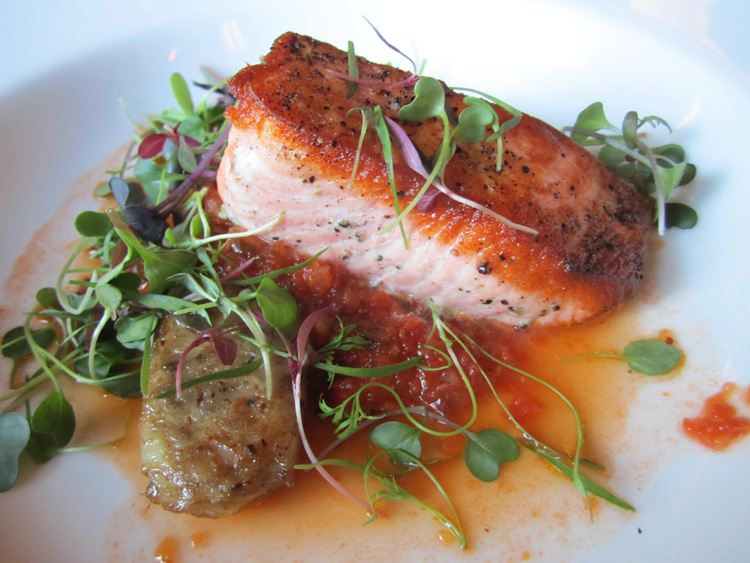 At the end of this post, I have included the recipe for the Spicy Sausage and Salmon Cioppino, generously provided by Chef Brian Scheehser.

This is a beer blog, so I won’t go on and on about the amazing food at this event, but I do want to point out that the bar at Trellis is perhaps the best place to drink craft beer in downtown Kirkland. Not only is the bar lovely, with a very nice enclosed patio seating area suitable for year-round drinking and eating, but Trellis features eight taps pouring a very impressive, rotating selection of craft beer, with many more available in bottles.

Trellis defies the Beer-Food Paradox. This is a serious restaurant that actually gives a damn about beer. It is refreshing. One of my personal goals in writing this blog is to help elevate beer’s position in the culinary world. I applaud Trellis and Chef Brian Scheehser for their appreciation of fine beer.

With no further adieu, I present the recipe for the salmon dish that blew my mind.

Pan sear to get a golden crust: may then be finished in oven

Cut sausage in ½ and pan sear slowly not to over cook for 5-7 minutes until golden brown cover and let rest.

3 tsp tomato paste (may be purchased in a tube)

Salt and pepper to taste

Plate dish with farm sauce in the bottom of a large soup bowl, place sausage and salmon on top garnish with herbs and basil