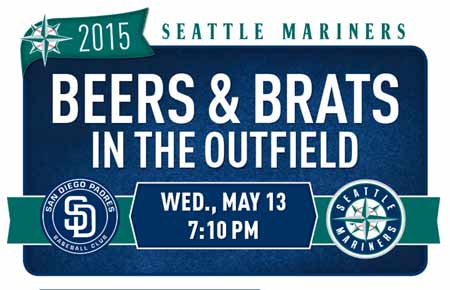 They do this every year during Seattle Beer Week and every year I have some stupid reason why I cannot attend. Same story this year. But every beer-loving baseball fan should consider attending Beers and Brats in the Outfield. This year, there’s an additional twist: the Mariners just happen to be playing San Diego, another one of America’s great beer cities.

On the field the Mariners will play the Padres. In the stands, you’ll enjoy beers from Seattle breweries like Fremont Brewing and Black Raven Brewing, along with San Diego brews from the likes of Green Flash Brewing and Stone Brewing. In addition to the regular lineup, there will be a specialty beer from each brewery. Here are the details:

The Odom Corporation and Safeco Field present the 6th Annual “Beers and Brats in the Outfield” during Seattle Beer Week. Come support our local team and amazing craft beer scene, as the Mariners take on the Padres in their only home matchup of 2015.

San Diego has a great beer scene as well, so why not put two of their best breweries up against two of ours? Green Flash and Stone Brewing will represent SD, while Fremont and Black Raven pull for the M’s. One specialty keg from each brewery will be tapped!

Only 200 seats are available to this private pre-game function in Patio in The ‘Pen. Keeping with the tradition, your ticket includes a main level seat for the game, a Bratwurst buffet, and two complimentary brews!

$71 – Includes a Main Level ticket & pre-game event in the Patio at the ‘Pen!
DEADLINE TO PURCHASE: Friday, May 8 – 5:00 p.m.
(or while tickets are still available)
TICKETS WILL SELL OUT FAST – GET YOURS NOW!