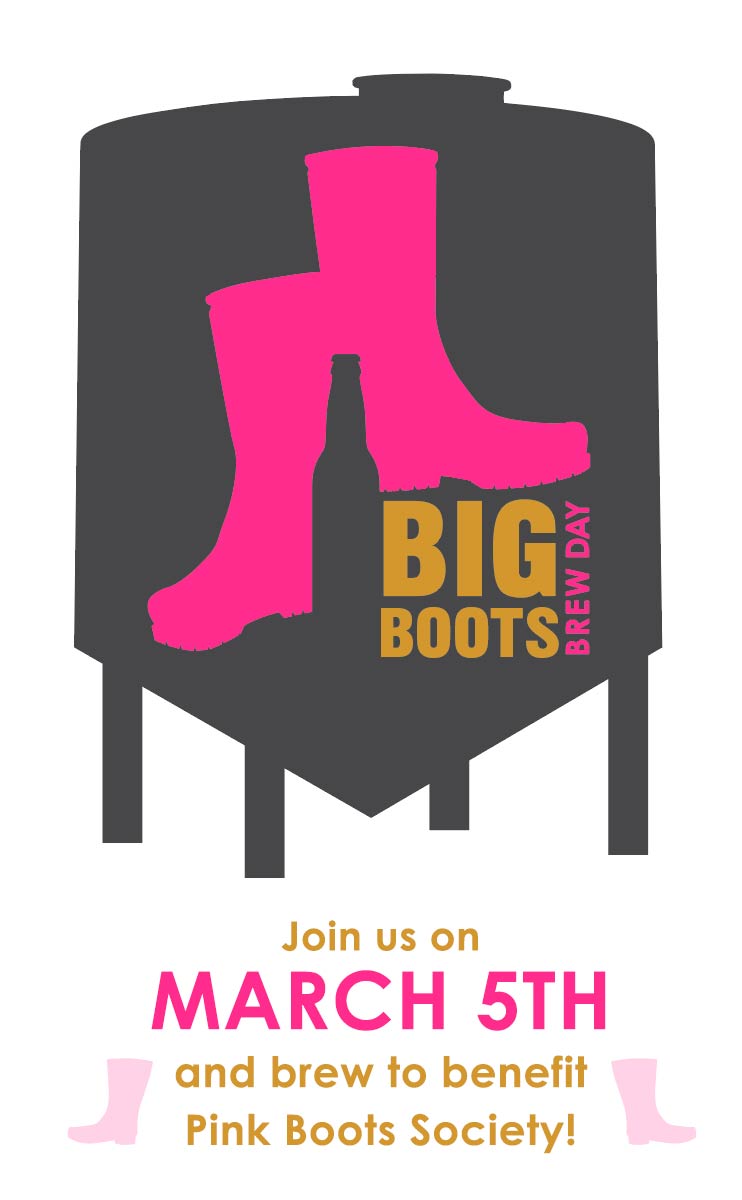 Instead of me (a dude) trying to tell you about it, I’ll leave the words to Michelle Svendson of North Jetty Brewing in Seaview, WA, which will host Big Boots Brew Day this Saturday.

In honor of International Women’s Collaboration Brew Day, Pink Boots Society chapters, members, breweries and supporters around the world don their brewing boots and brew a beer at their brewery, brewpub or house for the benefit of the Pink Boots Society. This year Pink Boots Society’s Big Boots Brew Day takes place March 5th. With over 2500 members in 25 countries, the variations are limitless!

North Jetty Brewing on the Long Beach Peninsula is hosting the Columbia Pacific Chapter’s Big Boots Brew Day. The beer will be a wheat beer with Citra, Simcoe hops in the boil and Mosaic for the dry hop. Strawberries, rhubarb, and lemon zest will be added after fermentation for a light touch of fruit flavor and a taste of summer! The name will be decided on brew day by all the participants. The finished beer will be available mid to late March at North Jetty Brewing, Fort George Brewery, North 47 Brewing Co., River Mile 38 Brewing Co., and Pickled Fish Restaurant atop the Adrift Hotel overlooking the beautiful Pacific Ocean.

Participants on the day will include Stephanie Leach- owner/brewer from North 47 Brewing, Piper Gladwill and Alix Daggit both brewers from Fort George Brewery, Joan Chester from River Mile 38, Emily Engdahl- Executive Director of Pink Boots, Tanner Davies- Washington Territory Manager from Country Malt Group, and Andi Day- Executive Director of the Long Beach Visitor’s Bureau. We are also pleased to have eight local Pink Boots members and employees from Astoria/Long Beach Peninsula area restaurants joining us to brew. The brew day will be hosted by Michelle and Erik Svendsen- owners and brewers at North Jetty Brewing. We would like to thank our generous sponsors – Country Malt Group, Imperial Organic Yeast, and Fort George Brewery for donating many of the ingredients.

The mission of the Pink Boots Society is, “to empower women beer professionals to advance their careers in the beer Industry through Education,” which it accomplishes by providing professional training scholarships and seminars. Pink Boots Society’s Big Boots Brew Day fosters brewing collaborations among its members and supporters; it is also the nonprofit organization’s largest fundraiser.