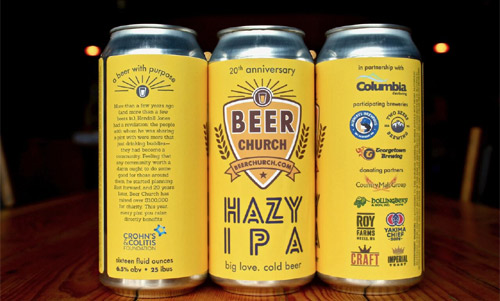 In addition to producing the Washington Beer Blog, my wife and I operate Beer Church. The mission is simple: provide easy ways for beer-loving people to support worthwhile causes. For over two decades Beer Church has accomplished this in two ways.

First, we organize and host fundraisers, something we’ve done for 20 years. This year the 20th Annual Beer Church Turkey Bowl takes place at West Seattle Bowl on Saturday, November 17 — a fundraiser and food drive for West Seattle Food Bank. We are sold out for the bowling, but everyone is invited to come join the fun from 5:30 – 8:00 and participate in our target raffle. The event is also the official release party for Beer Church Hazy IPA. 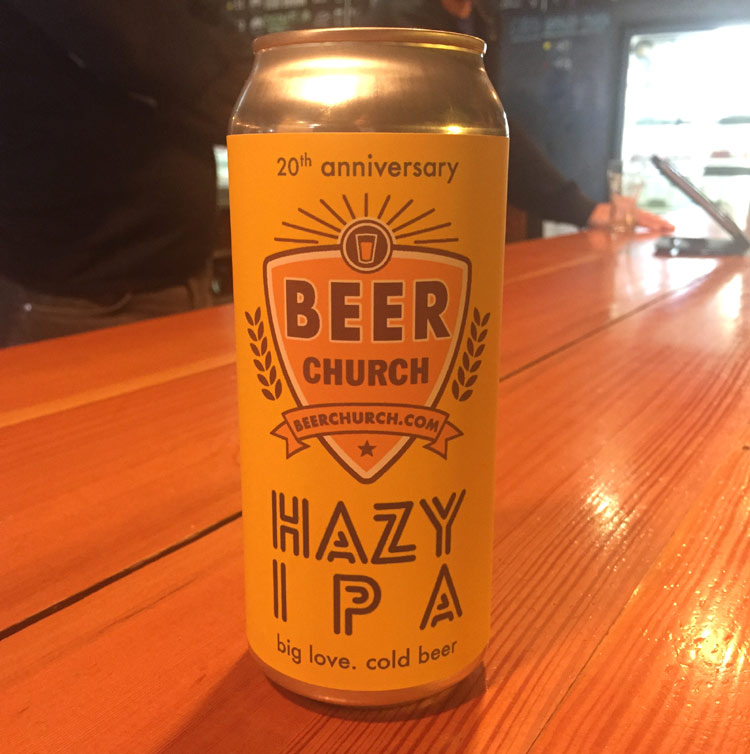 Second, for the past eight years, around Thanksgiving, we’ve released a beer to benefit a not-for-profit organization. Since 2012, we’ve worked with Two Beer Brewing in collaboration with other local breweries to benefit the Crohn’s and Colitis Foundation of America. Our collaboration partners for this year’s Beer Church beer were Airways Brewing, Georgetown Brewing and Two Beers Brewing. We brewed this year’s beer at the Two Beers Brewing facility in Seattle, where we were joined by our our other supporting contributors.

In formulating the beer we wanted to create something kind of hazy, kind of dry, and very hoppy. It is not as murky as a Milkshake IPA and not as dry as a Brut IPA, but it’s a beer that benefits from the best attributes of those two styles. For the hops, we used Azacca, Comet, and Citra Cryo hops.

This year’s version of the beer, Beer Church Hazy IPA, is now hitting the streets on draft and in 16-ounce cans. Find the beer at all three of the collaborating breweries’ tasting rooms and at select local bars. Look for the cans at Two Beers Brewing’s tasting room in Seattle and at Airways Brewing’s tasting room in Kent, as well as select bottleshops around Seattle. Keep an eye on the Beer Church Facebook page where we’ll share more availability information. Cans of this beer will go fast!

If you cannot make it to Beer Church Turkey Bowl, Two Beers Brewing will release the beer at the brewery on that same day at its tasting room. Saturday, November 17th at 1:00.

The beer and its fundraising component represent a partnership between three breweries, three hop suppliers, a grain supplier, a yeast supplier, a can supplier, and a beer distributor. 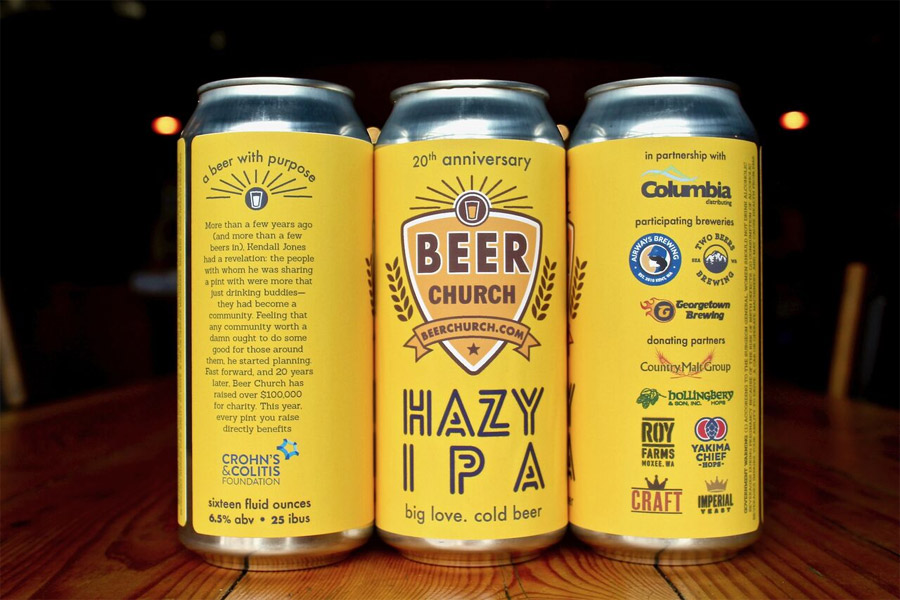 The goal this year is to earn $10,000 for the Crohn’s and Colitis Foundation of America, Northwest Chapter. Because of the participation of our collaborating breweries, our contributing sponsors, and our matching sponsor, every drop of Beer Church Hazy IPA you consume represents a donation to the cause. With the help of Columbia Distributing, which agreed to match our earnings, we intend to raise a total of $20,000 for the cause, a great way for us to commemorate the 20th anniversary of Beer Church.

A lot of love went into this beer, which is why the tagline Big Love, Cold Beer is so appropriate.

As far north as Bellingham and as far south as Olympia, here’s where to find the beer. Check with each location before making a special trip. Note it is also available at the three collaborating breweries: Airways Brewing, Georgetown Brewing and Two Beers Brewing. While supplies last, of course.