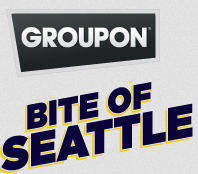 A couple years ago, I tried to start a movement to get local craft beer represented at the Bite of Seattle. I tried to point out the incongruity of the situation. An event celebrating local food was totally devoid of local beer. I’m no dummy and I understand that big beer companies throw a lot of money at events like this in exchange for domination of those big beer gardens. Or some legal version of that scenario. Still, I thought it odd to celebrate local restaurants and food while offering only uninspired beers brewed by multinational corporations as if we didn’t have any good, local beer around here.

I’m happy to announce that we are making progress. This year, Bite of Seattle will include The Bite Craft Beer Tasting. In the Fisher Pavilion, over 70 assorted beers and ciders will be available. You’ll need buy a separate ticket to get in ($20), so think of it as a beer festival within the larger Bite of Seattle festival. WABL (Washington Beer Lovers) will even have a booth there.  This represents a huge leap forward the Bite of Seattle. Find more details about The Bite Craft Beer Tasting in the press release below.

Many of the beers and ciders are not from around here, but there will be plenty of local products available. As I said, we are making progress. The Washington breweries include:

Here is the press release:

Seattle, Wash. – Producers of the Groupon Bite of Seattle® are proud to announce that along with showcasing a selection of the area’s best restaurants throughout the weekend, an area devoted to craft beers and ciders with an emphasis on local brews will also be highlight at this year’s festival. The Bite takes place July 19 – 21 at Seattle Center and will feature over 70 assorted beers and ciders.

Guests at this event will enjoy a fun ambiance. The tasting in Fisher Pavilion features games, prizes and raffles and is the perfect setting to kick back with friends and taste some of the most talked-about crafts in the area. Washington Beer Lovers will also have a table set up for members.

Guests may purchase a craft beer tasting package for $20 that includes a wristband, a commemorative Groupon Bite of Seattle® 5 oz. mug and 5 tastes. Beer tasting patrons must have a wristband and mug to sample beer, but all guests 21+ are welcome. Additional tastes are available for $2 each, and wristbands are good for the entire weekend.

For more information on the Bite Craft Beer Tasting or the Groupon Bite of Seattle®, please visit www.biteofseattle.com or call  (425) 295-3262 .