A few weeks ago we attended a pre-opening event for Brave Horse Tavern—Tom Douglas’ new gastro-tav in Seattle’s burgeoning South Lake Union neighborhood (see that post). We were delighted to learn that one of Seattle’s preeminent culinary superstars and prolific restaurateurs was directing some attention towards beer. Foodies and beer geeks are joined at the hip, and it’s time people start recognizing it. Recently, we paid a visit to the newly opened Brave Horse Tavern to see how it all turned out.

Here’s something you don’t see everyday: a purpose-built, wood-fired pretzel oven. While the pretzels are quite amazing, the spreads and dipping sauces steal the show. My favorite is the cheddar-pimento spread, while Kim gravitates towards the smoked peanut butter and bacon spread. The burgers, made with 100 percent Painted Hills Natural Beef, are amazing and surprisingly affordable. Starting at $6, there are plenty of options for loading them up. Not a beef eater? Burger alternatives include chicken-fried turkey, albacore tuna, and a veggie burger. Beyond that, the menu is refreshingly brief, offering a few bar snacks and a few dinner-ish choices.

Brave Horse Tavern offers 24 draft beers on tap. I started out of the gate with a Sticke Alt from Chuckanut Brewery, while Kim saddled up a Schooner Exact Brave Horse Ale. With a focus on regional ales, I found the beer menu appropriate and satisfying. Out of deference for the word tavern, the Brave Horse offers Olympia Beer on draft—a good call when you think about what they could have chosen as their yellow-beer option. 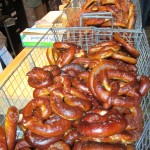 At first glance the beer menu seemed a bit heavy on Reds and Ambers. Recognizing that there is a culinary bend to Brave Horse Tavern, you cannot blame them for selecting beers that pair well with food (as Reds and Ambers are wont to do). After all, this is a Tom Douglas joint. If you ever hear me complaining about a Silver City Ridgetop Red, put me out of my misery.

Most pubs around Seattle with 24 craft beers on tap would lend more focus to IPA. I didn’t even notice, but someone brought it to my attention: just one IPA on tap. I appreciate the point that chef Warren Peterson is making. There are a lot of great northwest ales that are not IPA. Peterson is one of Tom Douglas’ chefs and the resident beer czar across all of Douglas’ restaurants. He is largely responsible for what’s happening at Brave Horse Tavern. To my taste, the beer selection was satisfying.

We’ll see how things evolve and whether Brave Horse Tavern decides to pander to the feral bands of IPA fans. Note that the Schooner Exact Brave Horse Ale behaves like a very well-heeled IPA. Not a wild stallion of an IPA, but a careful trail horse of an IPA. In the end, I recognize that sometimes you can lead a horse to water but you can’t make it drink anything other than IPA.

This historic building stands out as a relic, melding seamlessly into its recently constructed surroundings. Brave Horse Tavern offers sweet relief for the harems of Amazonians who occupy the countless cubicles of the South Lake Union technology corridor. Unbridled thirty-somethings find themselves comfortably surrounded by brick walls and plenty of soft and warm distressed wood. During daylight hours, the space is flooded with natural light, providing respite for fluorescent-weary, screen-focused eyeballs. 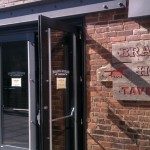 We visited on a Tuesday, arriving at about 4:30 in the afternoon. Very obviously, Brave Horse Tavern is already a popular happy hour spot for the many young techies that work in the area. It was busy, but not packed. Neither of the shuffleboards saw any downtime while we were there. The televisions played a mix of NBA playoff basketball and NHL Stanley Cup playoff hockey. The music was a mix of classic rock and contemporary alt rock—KZOK meets KEXP. The music matched the crowd.

We could not help noticing that Warren Peterson and Tom Douglas were both hard at work. Warren was minding the grill and Tom was working the pass—a hands-on approach that speaks volumes about Douglas’ commitment to the art of restaurateuring.

Some people might have doubted whether Tom Douglas could pull off something as lowbrow as a tavern. Truth is, Brave Horse feels upscale for a tavern, but not oppressively so. You’ll be comfortable in a T-shirt and jeans and you can catch a ballgame on the tube, but don’t expect to find anyone bouncing quarters off of the tables or vandalizing coin-op condom dispensers in the restrooms.

Civilized though it may be, this is not a sheep in wolf’s clothing: it is a tavern.

Why the Brave Horse

Back in the 19th and early 20th Century, before delivery vans and trucks crowded Seattle’s streets, horse drawn wagons delivered merchandise to shops and homes across the city. Many of the livery stables occupied the part of town we now call South Lake Union. Tom Douglas says the historical reference is the story behind the name Brave Horse Tavern.