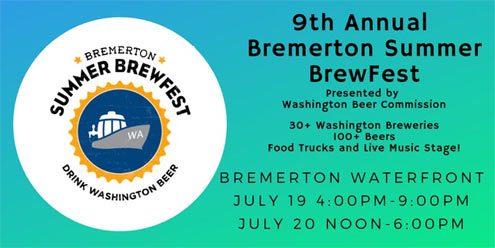 With summer now fully underway, it’s time to look forward to Bremerton Summer BrewFest. The 8th annual event takes place on the city’s waterfront and features in excess of 120 beers from 31 Washington breweries. We share the list of participating breweries, along with other info, below.

The event is held on the Bremerton waterfront, a very easy walk from the Bremerton ferry terminal, so walk on the ferry in Seattle and land at the festival.

Location
Bremerton Boardwalk
100 2nd Street
Bremerton, WA 98337
Festival entrance is located at the top of the boardwalk stairs between Hampton Inn and Anthonys.

Tickets
Tickets available via the event website.
Tickets are $25 in advance or $30 at the door. Along with all the beer, the event features live music and great food, all within 5-minute walking distance from the Bremerton/Seattle Ferry Terminal.
This a 21-and-over event. ID required.