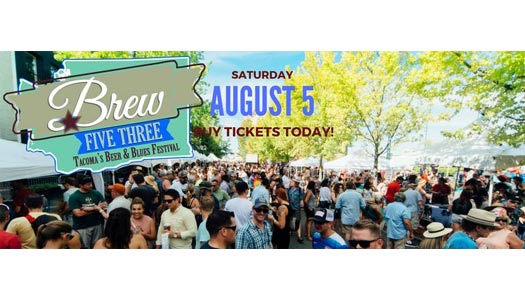 The 5th annual Brew Five Three is described as a block party in downtown Tacoma. Essentially, its a beer and music festival featuring some of the area’s coolest beers and hottest blues acts. The event, which takes place on Saturday, August 5th, will feature beer from more than 30 breweries and a full day of music. Add food to the bill and you’ve got a recipe for a great day.

Below, we share the list of breweries and cideries, as well as the music lineup and other important details. Tickets are on sale now. This is a 21+ event.

The festival was recently honored by the Tacoma Chamber of Commerce with a New Tacoma Public Places Award, “recognizing the best activation of a public park, open space, or area in the public right-of-way.” Brew Five Three is presented by the Broadway Center for the Performing Arts.

Downtown  Tacoma block party on Broadway between 9th and 11th.

Advance tickets are $25 through August 1, $30 the week of the festival, and Day of are $33. Full-price tickets include six tasting tokens and a souvenir glass. Members of the military may purchase a $25 ticket without expiry. Designated drivers tickets are $10, but do not include a glass or tokens. Box office fees apply.