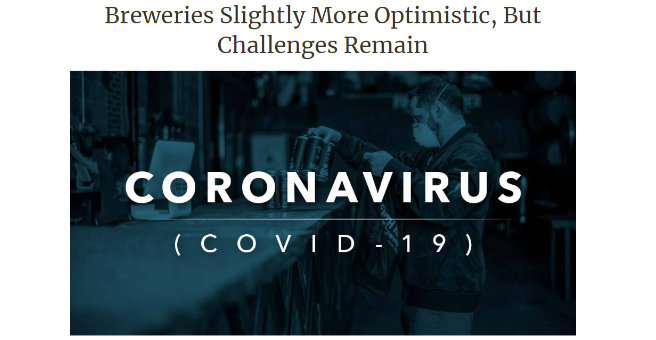 The Brewers Association (BA), which represents the interests of the nation’s small and independent brewers, conducted a survey at the beginning of April to understand the impact of the pandemic shutdowns. The craft brewing industry was still in total shock at that time and, understandably, the survey results suggested that many breweries saw themselves in dire circumstances because of the COVID-related shutdowns. At that time, nearly half of the responding breweries said they didn’t see themselves surviving the next three months unless things changed.

I am not trying to blow sunshine up your Utilikilt, but there seems to have been a shift in attitude since the BA conducted that survey. A new survey suggests some optimism is starting to shine through the dark clouds.

At this point, it probably sounds like a broken record. The shutdowns mean no on-premises, by-the-pint beer sales in brewery taprooms, and no draft beer sales to restaurants and bars. Those are two of the top sales outlets for many breweries. With those sales channels currently gone because of the pandemic, many breweries feared the worst.

And then breweries got creative. They began to adapt and make the best of a lousy situation. Around Washington, we’ve seen countless breweries forge ahead in any direction they can find: canning their product for the first time, offering curbside pick-up service for the first time, providing home-delivery and shipping services for the first time, and creating various kinds of other opportunities for consumers to show their support. Of course, assistance doesn’t hurt and a lot of breweries have apparently taken advantage of PPP loans.

The latest reports from the Brewers Association and its recently conducted survey show that the business adaptations we’ve seen here in Washington are not particular to our local breweries. This is happening across the entire nation. Along with those adaptations, increased optimism.

Here are the highlights of what the Brewers Association is now reporting:

The original survey, which was conducted two months ago, revealed that nearly half of responding breweries felt that they could not survive if the current circumstances continued for three months. The follow-up survey reports that 42 percent of respondents now say that their attitude about the future is “somewhat more optimistic” or “much more optimistic.” About 33 percent say that their attitude is “the same.” The remainders say they are somewhat more pessimistic (17 percent) or much more pessimistic (7 percent).

Perhaps more telling in terms of overall optimism, for this survey the BA asked, “Given what you know right now, how confident are you that your brewery will still be in business at the end of 2020?”

Almost 83 percent of respondents said that they are either “somewhat” or “very” confident that they will survive the ravages of 2020. So over the past couple months, we’ve gone from nearly half of the breweries saying they can’t survive the next three months to over 80 percent saying they have some confidence they’ll survive the year.

From my perspective, that speaks to an overall increase in hope. Two months ago, almost half of the breweries thought they were doomed. Today, 80 percent can envision themselves surviving the ravages of 2020. Perhaps that’s an over-simplified interpretation, but I’ve always been a half-full kind of guy.

Obviously, this is a moving target as things are changing constantly right now and no one is certain what the future holds. As a consumer, continuing to support your local, small brewery is all you can do.

Read the entire report from the Brewers Association here.

Lateral A IPA, an experimental, collaboration beer with a great backstory
Going silent and closing this Friday in solidarity with Black Lives Matter
Cider industry veterans launch a new cider venture - Yonder Cider and The Source