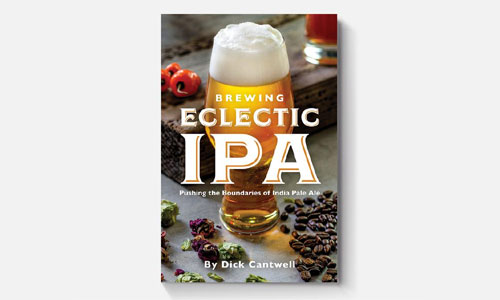 Most beer lovers appreciate a good IPA. Those who don’t are often ostracized, fairly or not, for being contrarians or snobs. Why do so many breweries these days produce so many IPAs? Because breweries are in the business of selling beer and IPA is what people want to buy. If your palate is too sophisticated for IPA, then I suppose you’ll just have to suffer through these harrowing times. Meanwhile, the rest of us are enjoying the golden age of beer.

For brewers, the challenge is to make your IPA stand out in the crowd. Not an easy task. I remember when Elysian Brewing introduced Avatar IPA, brewed with jasmine flowers. That beer stood out in the crowd. At a time when IPAs had not yet grown eclectic, Dick Cantwell created one that was.

All that having been said, Dick Cantwell just published a new book that every craft brewer in America probably needs: Brewing Eclectic IPA: Pushing the Boundaries of India Pale Ale. If you’ve been wondering what Dick Cantwell has been up to since leaving Elysian Brewing, well this is part of it. He’s now also one of the owners of a brewery in San Francisco (read about that).

Here’s the official blurb about the book:

Craft beer’s most popular style, India Pale Ale, is experiencing a flavor revolution. Brewers are using a wide range of ingredients, from cocoa nibs to coffee, fruits to vegetables, spices, herbs, and even wood, to push the boundaries of the style.

Explore the creative ways these flavors are included when brewing these highly-hopped beers. Try your own version using 24 recipes for contemporary IPAs designed by one of the country’s top brewers.

You can order a copy of the book here.