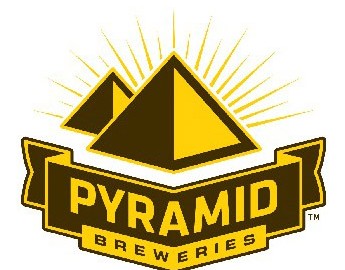 The other day I visited the Pyramid Alehouse in Seattle. It was the first time in a long time, I admit. For the past few years seeing the old brewery in mothballs made me a bit sad. Although the company’s headquarters is still in Seattle, Pyramid Breweries halted the last vestiges of its Seattle brewing operations in 2008. The Alehouse remained a good place to go for a beer and a bite before or after an event at one of the nearby stadiums but there was nothing local about the beer.

The dark days are over. Pyramid is once again brewing beer at its location across the street from Safeco Field. Once again, it is the Pyramid Alehouse and Brewery. The Washington Beer Blog welcomes Pyramid Breweries back to our list of Washington Breweries.

While the Pyramid products that you find on shelves around town still comes from the big brewery in Portland, Kim Brusco has resurrected the Seattle brewery and is making delicious beers in comparatively small batches. The Pyramid Alehouse on First Avenue South now serves Brusco’s 100 percent Seattle-brewed beers alongside other Pyramid products.

I don’t want this to be a history lesson but to understand the significance of this latest development you need some historical perspective. Here’s why I think this is such a big deal.

In 1985 the Hart Brewing Company of Kalama, WA introduced a beer called Pyramid Wheaten Ale. Hart Brewing was the first American brewery to produce a year-round wheat beer since Prohibition. For many of us oldsters, Pyramid Wheaten Ale conjures memories of a time when good beer had not yet hit the big time. Back in the late 1980s I felt very lucky if I stumbled into a Seattle bar and found two craft beers on tap. And when I did, likely one of those taps was dedicated to Pyramid Wheaten Ale. It was a great product and for many people it was a gateway to the world of craft beer.

It’s a long story but, in short, Hart Brewing became Pyramid Breweries, Inc. There was a public offering in the mid 90s. There were painful mergers and acquisitions along the way. Eventually the great wheat beer from the little brewery in Kalama, WA became nothing but a memory. The Wheaten Ale of the 80s morphed into the Hefeweizen of the 90s and beyond. Still, Pyramid remained a strong brand with roots dating back to the earliest days of the craft beer revolution. For many of us it remains a “Washington beer” in spirit at least. Chalk it up to nostalgia.

One thing that didn’t change from the 80s to the 90s and beyond, Pyramid kept winning medals for its wheat beers.

Perhaps the most confusing episode in Pyramid’s history was the decision to rebrand its Hefeweizen in 2008. (Not coincidentally the same year they decided to shut down the brewery in Seattle.)  In a move reminiscent of the “New Coke” debacle, Pyramid decided to change the branding of its legendary Pyramid Hefeweizen to Haywire Hefeweizen.

Another significant change, NAB seems to appreciate a more crafty approach to managing the breweries it owns. Press releases, not to mention the current situation at the Seattle brewery, suggest that NAB intends to foster a spirit of independence.

“Moving away from the tradition that made us great was a mistake,” said Ryan Daley, brand manager for Pyramid. “Our consumers connected with our Pacific Northwest heritage and craft beer brewing tradition… Our beer no longer reflected our rich history.”

Recent developments at the Seattle brewery seem to be evidence of a change in corporate culture. Pyramid brought in Kim Brusco, a well-known member of the local brewing community, to reopen the brewery and reintroduce Pyramid to the local beer scene. Not content to be just a faceless national brand, NAB seems to recognize the value of making Pyramid cool again. By all indications, it is willing to give Pyramid the freedom to do what it needs to impress the local audience.

I am not a fool and I truly hope this is a sincere sentiment. I have no reason to doubt it at this point.

With experience as a head brewer and brewery manager, Kim Brusco was perfectly qualified to come in and end the brewery’s hibernation. He began brewing professionally in 1990 at a small brewpub in Pioneer Square and then moved on to Pike Brewing. Eventually his career took him to Redhook in Woodinville where he most recently worked as the Brewing Manager.

“At this point in my career I wanted to make some changes,” Brusco told me over a delicious pint of his Imperial Porter. “I left Redhook with only two requirements for my next gig: I wanted to be able to ride my bike to work and I wanted to get back to doing more hands-on brewing on a smaller system. My plan was to take some time off, do some skiing this winter, and just let things happen. Then this great opportunity came up.”

Kim Brusco is also a musician—a bass player. A good rhythm section is always about structure. There is plenty of room for creativity and imagination, but only within the strict bounds of tempo and time. As for the opportunity at Pyramid, it seems that the size of the brewery (15-barrel brewhouse), the location within reasonable distance of his home in Seattle, and the combination of structure and independence appealed to Brusco. At this point in his brewing career, this is where he wants to be .

Currently the Alehouse is pouring Seattle-brewed Imperial Porter and Hop-Tep IPA. Next up is a Spring Bock that is currently conditioning. Expect it to start pouring in a few weeks, though Brusco says he wants to make sure it gets enough time to properly condition. I was particularly impressed with the Hop-Tep IPA, although the Imperial Porter was also delicious.

The name Hop-Tep IPA is homage to a quirky but critically acclaimed film, Bubba Ho-tep, which imagines Elvis Presley living out his senior years in quiet anonymity. Why did Brusco name his IPA after that film? You are free to read-in to it whatever you like.

In addition to feeding the taps at the Pyramid Alehouse, the Seattle-brewed Pyramid beers will soon be available at local pubs. Among others, the Latona Pub and the Beveridge Place Pub (blog sponsor) have already expressed interest in pouring Brusco’s beers.