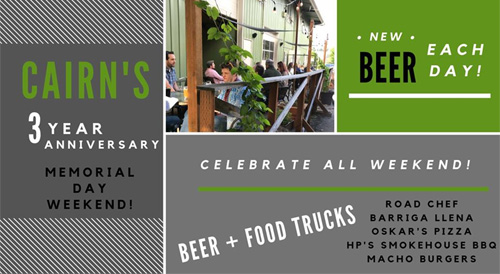 Cairn Brewing is about to celebrate its third anniversary. To commemorate the occasion, they will host four days of beer release events at the brewery and taproom in Kenmore, Washington. The events span across Memorial Day Weekend starting on Friday, May 24th.

“We can’t believe its been 3 years!” says Cairn Brewing’s Facebook event page. “Thank you for all of your continued support! We’ll be celebrating Memorial Day weekend with 2 new beer releases each day!”