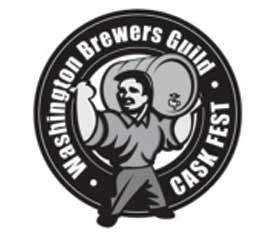 UPDATE: Contest is now closed. We selected a winner at random.

We are giving away a pair of tickets to the Washington Cask Beer Festival. (Good for either session.) All you need to do is check out the list of breweries and beers below and leave a comment telling us which one (brewery or beer) you’re most excited to drink. Leave a comment. On Wednesday, March 11th we will pick a winner at random from all entrants.

(Seattle, WA) March 6, 2015- Washington Brewers Guild will present its annual Washington Cask Beer Festival at the Seattle Center Exhibition Hall on Saturday, March 28. The event is known for its extensive beer lineup that focuses exclusively on cask-conditioned beer and this year is no exception.

While cask-conditioned beer is becoming more popular and available in recent years it is still quite a rare occasion to be able to sample more than 100 cask-conditioned beers in one place. From classic styles for purists that let the unadulterated flavors shine to more experimental beers that showcase unique ingredients and different conditioning techniques, all featured beers are unfiltered, unpasteurized, and expertly crafted by Washington Brewers Guild member breweries.

Here are some of the beers that will be pouring at this year’s Cask Festival. See the full beer list at www.washingtonbrewersguild. org/Events.html.

Oatmeal Stout – Stout may be the second popular style at the Cask Festival and there will be quite many versions of Oatmeal Stout in particular this year, including Machine House Bourbon Barrel Aged Oatmeal Stout, Elliott Bay Vietnamese Coffee Stout, Elysian Dragonstooth and Boundary Bay’s classic Imperial Oatmeal Stout.

Barrel Aging – Thanks to the growing number of distilleries in the area there are a wide variety of barrels available for aging beer these days. Try Schooner Exact Imperial Porter and Georgetown Tombourbon in bourbon barrels, Bainbridge Island Five-Masted Baltic Porter aged in a rum barrel, and McMenamin’s Paeter’s Porter and Bellevue Scotch Ale aged in whiskey barrels.

Collaboration Beers – Washington brewers are known to embrace opportunities to collaborate with one another to share inspirations, techniques and good times. Brewers from Anacortes Brewery, Big Time Brewery and Diamond Knot Brewing got together to brew a collaboration beer, Broken Mirror, an Imperial Milk Stout with lactose and cocoa nibs. Each brewery will bring a different version to the Cask Festival; Anacortes version with peppers, Big Time with coffee and vanilla, and Diamond Knot with dried cherries macerated in Jamaican rum. Another collaboration beer not to be missed is United Red Ale Women’s Collaborative Brew by Hale’s Ales Brewery organized by the Pink Boot Society celebrating women in the beer industry.

This year’s Herbert’s Legendary Cask Festival Ale, a Cask Festival favorite and an ultimate collaboration beer was brewed at Postdoc Brewing, one of the newest members of the Washington beer industry. Herbert’s is a collaborative beer that’s brewed at a different host brewery each year in honor of a Northwest beer icon, Bert Grant. More than 20 Guild member brewers participated in the brewing session at Postdoc on February 24 to honor this long-running Cask Festival tradition. The beer will make its debut prior to the Cask Festival at the release party hosted by The Latona Pub (6423 Latona Ave NE, Seattle, www.3pubs.com) on Monday, March 23.

The Cask Festival will host two sessions; from noon to 4pm and 6pm to 10pm on Saturday, March 28 at the Seattle Center Exhibition Hall. Admission is $40 in advance or $45 at the door, if tickets are still available. This event may sell out so advance purchase is recommended. Separate tickets are required for each session. Admission includes a commemorative tasting glass and up to 25 sample tastes. Tickets are available online at www.washingtonbrewersguild.org and at select ticket outlets. This is a 21-and-over-only event.

Rainbow in the Dark (Imperial Stout)

*Available to WABL members only