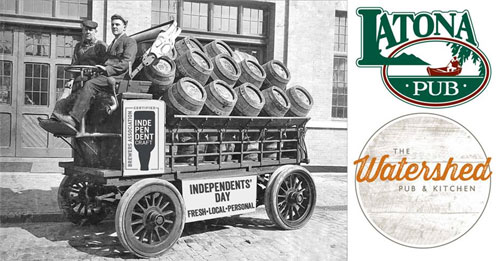 No, that’s not a typo in the headline. We’re talking about a day to celebrate independents, not independence. In the spirit of Independence Day, the Latona Pub and Watershed Pub & Kitchen celebrate the independent spirit of craft brewing on Tuesday, July 3rd with tap lists made up entirely of beers from independently distributed Northwest breweries. Visit either of these fine eateries/drinkeries and celebrate Independents’ Day. See the tap lists for each pub below.

Independence in the beer industry means a few difference things. First up, the vast majority of the breweries we love are independent breweries. They are owned by people, by families, by individuals and not by corporations or other, larger non-beer companies. This kind of independence is a cornerstone of the Brewers Association’s definition of “craft brewery.” You can read more about that here.

When we say that a brewery is “an independent” it can also refer to a brewery that distributes its own beer. In the United States, alcohol is sold via a three-tier system. That is, producers sell to wholesalers (distributors), wholesalers sell to retailers, retailers sell to consumers. It’s the law, plain and simple. In Washington, breweries are allowed to operate as their own distributors. They distribute their beer independently, not via a wholesale beer distributor.

It is not an inherently bad thing for a brewery to sell its beer through a distributor. Many, many great breweries do. Still, for smaller breweries signing up with a distributor might not make sense. It is a daunting proposition, one that most breweries avoid until they reach a certain size. Independently distributed breweries face some challenges, that’s for sure.

So cheers to the breweries that go at it alone, parking their little cargo vans next to the distributors’ big beer trucks. And cheers to the Latona Pub and to Watershed Pub & Kitchen for celebrating independents’ day.