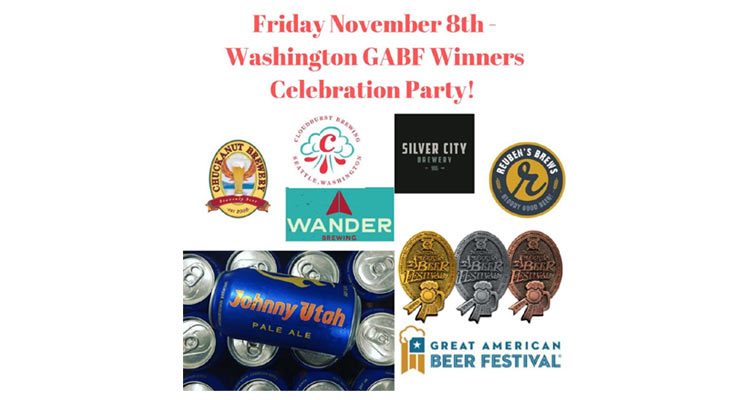 Every year, Washington breweries bring home medals from the Great American Beer Festival (GABF), the most prestigious beer competition in North America. No doubt, a lot of people wonder, “What’s the big deal?” Well, this Friday you can find out if you agree with the panel of experts that judged these beers to be among the best in all the land. The Beer Junction is providing a chance to taste some of this year’s winners. Washington’s breweries earned 14 medals this year and The Beer Junction is getting as many of those winning beers as they can. Here’s the event info from Facebook.

For starters- JRob from Georgetown Brewing will be here to celebrate the Gold Medal they won for Johnny Utah!

9. Cloudburst: both of their winning beers are out of season. But we’ll definitely have at least 1-2 of their other beers on tap!
10. Grains of Wrath: Repentless Double IPA (their medal winning Vienna Lager is not currently available)
11. Fortside: something from them, but we haven’t decided yet which beer (their medal winning Palisade #2 is not available)

Breweries that won’t be represented:

– Haas Innovations Brewing (Yakima) won for their Loral Zwickelbier. They are a small research brewery and hop supplier. Their research brewery is not open to the public and they don’t really distribute. They sent me a nice message that they unfortunately didn’t have anything available but wished us well for the event.

So in total we’re looking to have 8 of the actual winning beers on tap, plus have 10 of the 11 winning breweries represented. We also might have other special treats from some of these breweries on tap so stay tuned!

Canceled - Washington Cask Beer Festival
Embrace the mildness with Machine House Brewery and participating locations
During the shutdown, The Republic Bottleshop opens up in Marysville